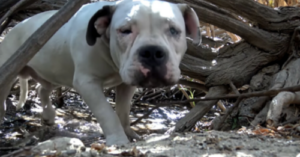 When dogs are found starving, homeless, and cowering in fear, rescuers need great patience and a gentle touch. Two women from the rescue group Hope for Paws in Los Angeles rose to the challenge to save the life of a scared, malnourished Pit Bull that was too weak to walk, even to get food. They named the dog Tarzan and the story of his rescue will break your heart. 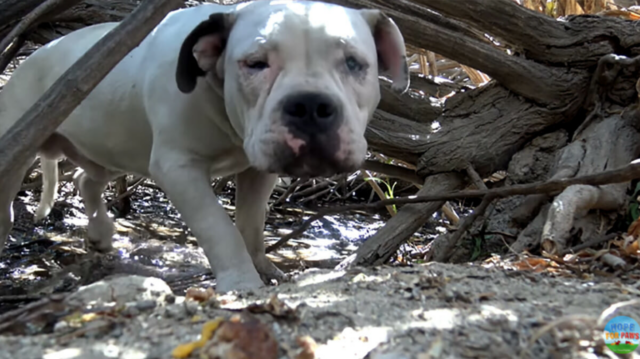 Tarzan must have had some very scary encounters with humans. He was so afraid that he hid inside thick brush alongside a Los Angeles freeway. People noticed him there but he only hid himself further. He wanted nothing to do with people who could cause him further harm. It was clear that Tarzan was hungry and weak but he couldn’t be coaxed to come out, even for food.

Hope for Paws Called in to Rescue Tarzan

One good samaritan decided to enlist the help of a local rescue group, Hope for Paws. He called them up and two women from the group came to the scene to see if they could save Tarzan. The women spent hours patiently and quietly sitting near Tarzan, offering him small bits of food. The poor Pittie was so weak that he could not move to the food. They knew just what to do, moving the food to him instead.

Over time, Tarzan was able to eat. Slowly but surely, the food helped him regain the strength he needed to come closer to safety. The rescuers pet his head and spoke softly to him, trying to convince him that they could be trusted. Tarzan was finally convinced that his rescuers were there to help and he crawled out of his hiding spot. Image Screenshot Hope for Paws/YouTube
The Pit Bull Was Too Weak to Walk, So the Two Women Carried Him

Once Tarzan came out of his hiding spot, he made it to a nearby pool of water and drank at length. He was surely dehydrated, which was likely contributing to his weakness. The rescuers were able to put a leash around his neck to guide him to their car to see a vet. But Tarzan was too weak to walk. The rescuers did not hesitate. They picked him up and together carried him all the way to their car. 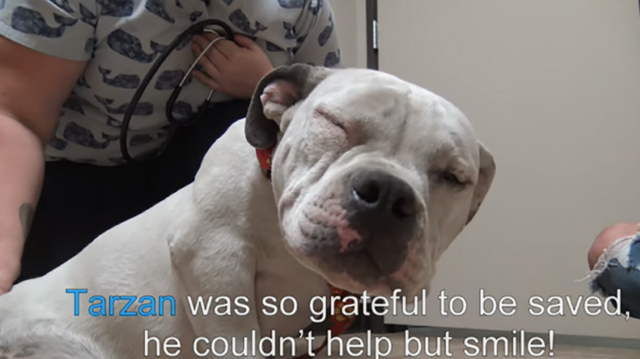 Tarzan was taken to a vet and given the attention he needed to get on the road to recovery. He was so relieved that he smiled in gratitude. Tarzan will now be able to find a family that will love and protect him like he deserves.

Spread the love Of course, every dog breed is amazing and lovable. There’s no doubt about that. But many dog...

Milkshake, The Rare Pink Pug, Takes Over Instagram And Our Hearts!

Spread the love Milkshake is a special pup, not only because he’s adorable, but also because he has an unusual...