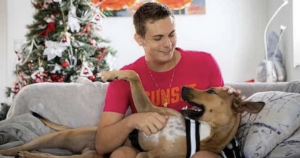 16-year-old Shane Koch of Florida was diagnosed with Tourette’s Syndrome when he was only 8 years old. Tourette’s is a nervous system disorder that causes tics that are difficult to control. All his life, Koch has faced bullying because of it, from students and even teachers.

But when he adopted a puppy named Callum, his world changed for the better. Callum helped boost his confidence and control his tics. Now, the pair are social media famous, which allows Koch to spread a little positivity to anyone who’s feeling down or out of place. 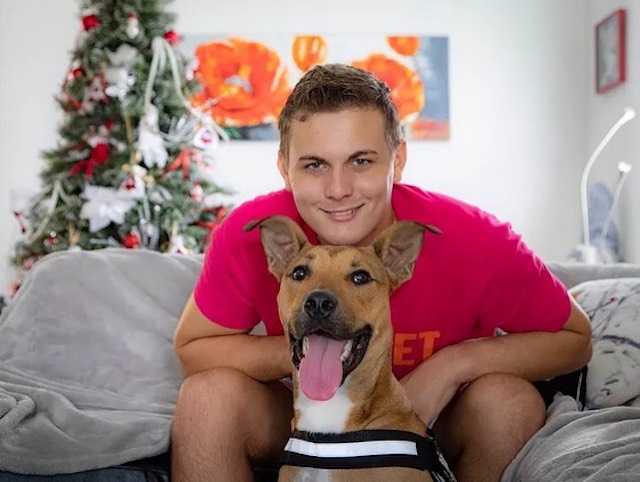 Callum was just a young puppy when Koch first adopted him from the Justin Bartlett Animal Rescue in Royal Palm Beach. The teen probably thought he was saving the puppy, but in the end, Callum ended up saving him too. Middle school had been difficult for Koch in terms of fitting in and being treated fairly. But as he began high school with a new furry friend at home, he felt a little more confident.

Not only is Callum fun to be around, but he also helps Koch better than any human can. The pup can comfort Koch whenever his tics occur.

I love you Callum! ❤️

“He notices when I do the tics, he’ll nudge me,” said Koch. “He can literally sense when I do those tics and as I feel it coming and a lot of that stress will go away.”

Koch also explained that having a dog, even if they’re not a service dog or therapy dog, can still help people greatly. Dogs are great at distracting you, playing with you, and keeping you busy. So, Callum helps Koch control his Tourette’s in a way that the teen didn’t even know was possible.

Not long after this bond began, Koch turned to TikTok to spread positivity. His videos of Callum became popular in no time, so now he hopes to be an inspiration to other kids with Tourette’s or those who simply feel like outcasts.

His face at the end! 😂 #dogsoftiktok #ColdWeather #bestdogontiktok

Koch started making TikTok videos at the beginning of 2020. He saw how popular the platform was, so he decided to try it out by recording a video of Callum. That video quickly blew up, gaining around 500,000 views. Plus, Koch had a good time filming it, so he decided to keep going. Now, he and Callum are social media stars with 1.4 million followers.

“I created the page to show awareness, to show that you are not different nor normal and it’s better to be weird than normal,” said Koch.

The dog and human duo share a wide variety of posts including short, silly skits and adorable moments of Callum just being himself. Koch’s goal of spreading awareness and positivity has become a success because now so many people look forward to his posts with Callum. Plus, the two of them seem to be having a great time in the process.

If you’d like to see more videos from Callum and Koch, you can view their TikTok page!

Shane off to bother me again for the 17,850th time today! 🙈 #dogsoftiktok #viral #bestdogontiktok #fyp

Spread the love As your dog’s caretaker, you want your beloved pooch to live a long, enjoyable life. This means...

Spread the love Wonka the service dog has only spent a few years on this planet, but he’s managed to...