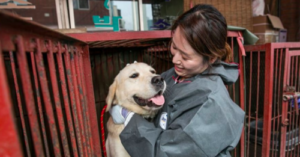 The international community is rejoicing. South Korean authorities shut down a well-known dog meat marketplace. Surprisingly, it was the actions of local vendors and authorities that made the closing of one of the largest dog meat markets in South Korea possible. What a fantastic way to work together!

Fortunately, the market was shutdown for good. Better still, HSI reported workers rescued more than 80 dogs from the facility. Rescuers transferred the survivors to safer conditions with the Humane Society International/Korea, the Korean Animal Welfare Association, and other organizations.

57 Dogs Saved From Korean Meat Market Are Enjoying Their New Lives In The U.S.

Government officials say they will transform the area into a public park. Well, that sounds like a much better use of the space! One day, maybe those rescued dogs will play in that park.

In a statement, Nara Kim, an anti-dog meat campaigner for HSI and Humane Society Korea said, “I cannot express enough my joy at helping to close down the dog meat shops and slaughterhouse at Gupo market.”

She continued, “The closure of Gupo’s dog meat market means the end of a gruesome era in South Korea’s dog meat history. [It is] a sign of the times that law enforcement and local authorities are cracking down on this increasingly unpopular industry that most Koreans want nothing to do with.”

A History of Fighting Slaughter

The fight against the meat trade is not new to this country. In November 2018, the Seongnam city destroyed the country’s largest dog slaughterhouse.

Remarkably, HSI said the Gupo closure was the first-ever “where complete agreement has been reached between the vendors and local authorities.”

“This major victory not only means an end to dog meat at Gupo, but it’s shining evidence of the strong tide turning against the dog meat trade in South Korea!”

The video below shows raw footage of the rescue. It’s incredibly moving. Get to know the brave dogs that survived these unimaginable conditions. Cheers to these survivors and the workers that rescued them!

Spread the love Kaley Cuoco has been showing just how devoted she is to her adopted senior Chihuahua, Dumpy. The...

Spread the love Rescuing a dog from an animal shelter is a life changing experience. From the moment you find...

The 10 Most Affectionate Dog Breeds

Spread the loveWhat could be better than dog kisses and canine cuddles? These breeds aren’t afraid to show their love...