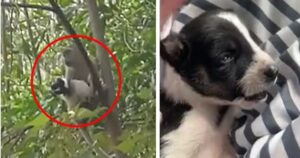 Much like we are used to seeing squirrels scampering about in our everyday environment, residents in Malaysia are accustomed to having monkeys prowling around. And while they may indeed be absolutely adorable, the macaques can be quite mischievous. They are even well known for stealing food from inside resident’s houses.

But one particular macaque opted to snatch something surprising—a two-week-old black and white puppy named Saru. Locals spotted the primate wrap the puppy up in its arms and then scamper up an electricity pole. There, it sat perched with the puppy in its arms, surveying the jungle below. 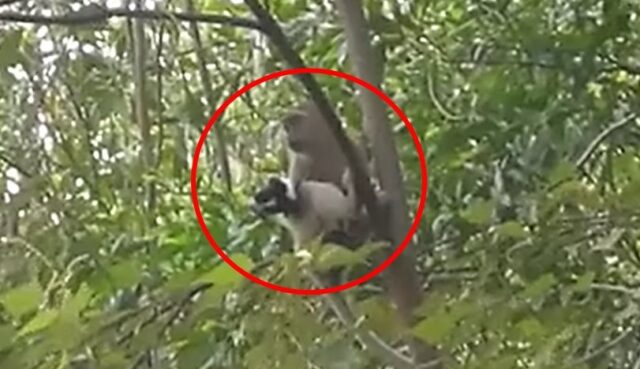 “It looked like it was treating the puppy as a friend or its baby, it was very strange. However, we still needed to save the poor dog because it appeared to have been starving,” shared onlooker Cherry Lew Yee Lee.

For three days, locals watched the wild monkey clutching the puppy as it moved around in the trees. The monkey was spotted returning to the same area three times, and residents did their best to save the pup with no success. They tried throwing small pieces of wood and rocks, but the monkey continued to outrun them by fleeing along electricity lines and then into the surrounding trees. 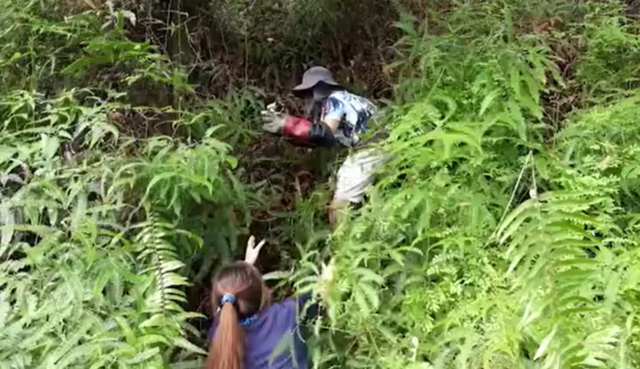 “The puppy looked tired and weary but the monkey did not seem to hurt it. The monkey was just holding the puppy while it moved around,” said Cherry Lew Yee Lee

Eventually, they decided to try to scare the monkey with firecrackers. When the monkey returned to find food, they lit them on the ground, and the loud noise frightened the macaque into dropping the dog. But don’t worry, Saru wasn’t hurt. His fall was cushioned by the thick jungle undergrowth below. Once the puppy was examined, it was determined that he was fine and just needed a nice meal. A local decided to adopt the pup and gave him the name Saru. They have since reported that the puppy is doing well in his new home.

Locals explained that this particular monkey is part of a “gang” of wild macaques in the area that are well known to steal food from the local’s houses. But after this doggy rescue, they believe the gang may also be responsible for other missing pets from the area. Saru, however, was thought to have been snatched from a stray dog’s litter, not from a resident’s home.

Pet Rescue Organizations Come Together To Save 90 Lives

Spread the love It&rsquos amazing what you can do when individuals interact! Over the past weekend, several organizations pulled together...

Spread the love Just over a week ago, horrific chemical explosions destroyed much of the city of Beirut. Over 150...