A dedicated animal lover in Mexico opened his home to over 300 animals to protect them from Hurricane Delta. With strong winds and heavy rain barreling down on his city, he knew he had to help his favorite furry friends.

Ricardo Pimentel has been fighting for the animals of the Yucatan Peninsula for almost a decade. He has dedicated his life to offering a promising future to every animal he meets by founding the Tierra de Animales (Land of Animals) shelter in 2011. Ricardo’s animal shelter was created on a strong foundation of love for animals. He always dreamed of having an animal shelter of his own, even rescuing street dogs from the time he was a child. With hard work and support from his community, the Tierra de Animales shelter was finally born!

When news of Hurricane Delta’s strength reached his community, Ricardo began to worry about the many animals at his shelter. With over 300 furry friends in his care at the shelter, he had to scramble for a suitable solution. Not only was he in desperate need of adequate shelter, he knew the pet stores could be closed for an extended period after the storm. Facing the possibility of a food shortage, he went to social media for donations. Thankfully for the animals of his shelter, he was able to raise enough to stock up!

“If I lived with just 10 or 20 dogs, I wouldn’t worry much, but here we have hundreds of animals and we can’t afford the luxury of not having enough food.” – Ricardo Pimentel

Now that the possible food shortage was addressed, it was time to determine the best means of shelter for the hundreds of pups in his care. With no other option to keep the animals safe, he knew he had to open his home.

In the hours leading up to Hurricane delta’s arrival, Ricardo and his family were hard at work bringing hundreds of animals into his home. It was quite the challenge for everyone involved since each animal had to be coaxed in on a leash. Not only did they open their doors to over 300 dogs, but they also welcomed in plenty of other critters as well. His patio was occupied by a flock of sheep, his son’s room harbored dozens of cats, and his daughter’s room was a haven for bunnies and chicks. Though his home was filled to the rim with furry friends, their safety made it all worth it!

“It doesn’t matter if the house is dirty, it can be cleaned. The things they broke can be fixed or bought again, but what’s beautiful is to see them happy, healthy and safe, without wounds and with the possibility of being adopted.” – Ricardo Pimentel

Ricardo posted a few photos of his current living situation with hundreds of furry friends riding out the storm in his home on Facebook. Due to a power outage, he had no idea his post had gone viral until days later.

Within days, animal lovers around the world were amazed by Ricardo’s dedication to keeping his beloved animals safe at any cost. With so many eyes on his impressive work, he was able to raise thousands of dollars for his shelter’s continued work. 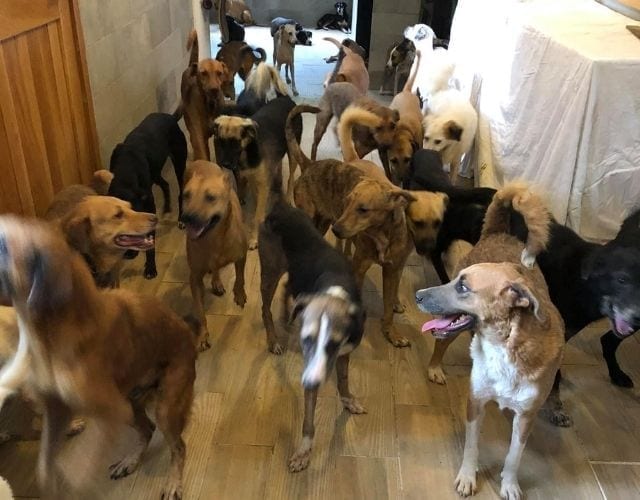 The Tierra de Animales shelter has since been helping their community recover from the impact of Hurricane Delta, and continuing their work in caring for the many animals of their community. By raising more funds than ever before, this team can go on to offer their compassion to every furry friend they meet in the future.

“We would like to think that thanks to all this attention, somebody would like to be part of the story and say: ‘I adopted a dog saved from that famous Hurricane Delta.” – Ricardo Pimentel

We can’t wait to watch the continued efforts of the Tierra de Animales shelter, and have no doubt Ricardo and his family will help so many animals to come!

The post Man Brings 300 Dogs Into His Home To Shelter From Hurricane Delta appeared first on iHeartDogs.com.

Spread the love Nagaland, a north-eastern state in India, finally made a change to save thousands of dogs. Like other...

Spread the love Valor is defined as boldness or determination in facing great danger, especially in battle; heroic courage; bravery. That word...

Spread the love Personally, I would not approach a wild animal, even in my own yard. Dogs, however, are far...