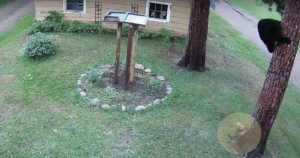 When most people look for a guard dog, they look for a large breed known for protecting. Those who adopt a toy breed probably aren’t expecting much beyond unlimited cuddles. Yet, one family was surprised to find out that their Yorkie was secretly a guard dog.

Bella the tiny Yorkshire Terrier is fearless. She doesn’t let anyone hurt her loved ones, no matter how strong they might look. The sweet pup recently went viral for scaring off a bear that was at least four times her size. She certainly doesn’t regret it, and she would do it again in a heartbeat! In June 2021, a bear entered a family’s yard in Hibbing, Minnesota. A camera overlooking the bird feeders caught the creature in the act. He appeared to be just a young bear, but Bella the Yorkie could tell he was a threat. Security footage caught the pint-sized pup charging toward the bear at full speed.

As soon as the bear saw the ferocious guard dog barreling toward him, he sped off and climbed up the nearest tree. The Yorkie stayed at the base of the tree to make sure the bear didn’t get any ideas. Every time the Yorkie put her paws on the trunk of the tree, the bear climbed up higher. It was like a human’s reaction when a spider comes running toward them.

“Our Yorkie, Bella, was let out for the first time of the day and went berserk. I quickly discovered that she had chased a young bear up a tree. Off-camera, I was calling and trying to coax her away from the situation,” Bella’s human said.

When Bella’s human finally got her attention, she ran off-screen for a minute. The bear took that moment to climb down from the tree and run away at full speed. Once Bella saw the bear taking off, she was right on his heels again until he was finally out of her yard. 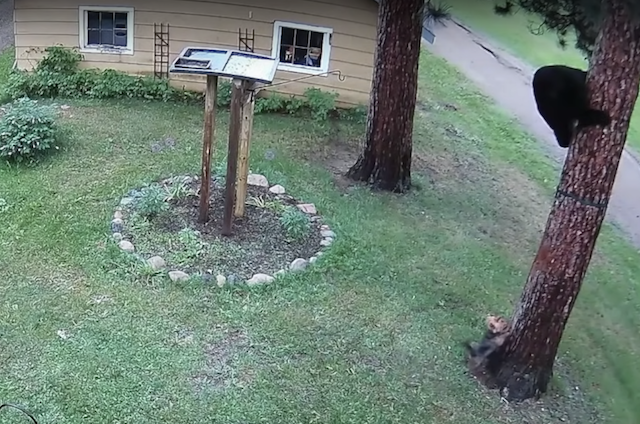 Luckily, both animals left with no injuries, but Bella had extra pride after that moment. She proved that no dog needs to fit exactly into their breed descriptions, but instead, they can be whoever they want to be. Bella decided she wanted to be a guard dog, and she proved that she could be.

Bella’s family is aware that wildlife shows up in their yard at times, so they try to take extra precautions. Yet, this bear seemed determined to find something to snack on until a protective Yorkie showed up.

“I have set up this camera overlooking our bird feeders to capture the occasional wildlife that comes especially at night. I take the feeders in for the night but there are always some remnants on the ground,” said Bella’s family member.

Of course, bears can be dangerous animals. Not all of them will flee the scene like this one. So, even if you have a brave pup like Bella, make sure you keep them safe from wildlife at all times.

The post Fearless Yorkie Chases Bear Up Tree To Teach Him A Lesson appeared first on iHeartDogs.com.

Spread the love The life of a stray animal is pretty rough in Cambodia. With limited support for stray animal...

Spread the love Just over a month ago, dog food company Sunshine Mills voluntarily recalled select food due to salmonella...

Spread the love Once the Camp Fire contacted Bill and Andrea Gaylord&rsquos 80-acre ranch they’d only minutes to evacuate. They...