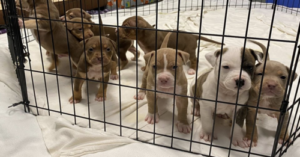 When a bartender got off work late at night, she was greeted by an unusual stranger. At around 2:30 a.m., a female dog was waiting patiently outside the bar. She paced back and forth, looking for someone to help her. The bartender knew she couldn’t just leave the dog behind, so she approached her. The dog ended up leading her away from the bar, and the woman gladly followed. However, she never expected what came next.

As the mysterious dog walked on, she paused from time to time to make sure the woman was still following. Every turn made the woman more and more curious as to where this would all lead. Finally, the dog led the woman to a playground, where is paused near a child’s jungle gym. There, under the slide, were eight newborn puppies. The mom had buried them in the mulch to keep them safe and warm. The woman had never seen anything like this before. 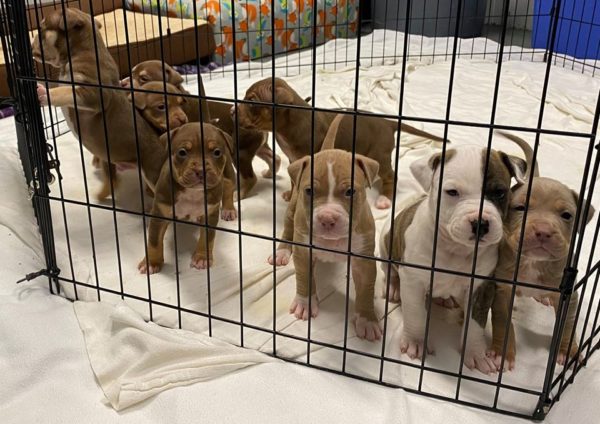 The woman knew she couldn’t just leave the puppies. After all, the mom had come to her looking for help. So, she contacted the Terre Haute Humane Society for help.

“You know, maybe a pregnant dog has shown up, or a pregnant cat has shown up and had their litter. [People will] call us and be like ‘We have this, can I bring it to you?’ That’s more common,” said Sarah Valentine with the humane society. “To have somebody say ‘This dog came running up to me and I found all these puppies at the park.’ That’s rare.” Valentine guesses that the puppies were only outside for about a day before they were rescued. Jersey knew that her puppies wouldn’t survive in the cold, so that’s why she searched for help. Sadly, it’s likely that this wasn’t her first time being alone outside.

“They’re doing great. The puppies have become very playful now. We’ve introduced food to them and toys to them, so now they’re playing and they’re eating,” said Valentine. The pups are becoming more and more playful with each passing day, especially since they’ve been exposed to toys. They’re starting to get more curious and energetic as they grow. One puppy even likes to crawl out of the pen when no one’s looking! They sure are a handful, but they’re all hoping to find a loving home in the near future.

The shelter explained that once Jersey and the puppies are available for adoption, they’ll be on their website, which likely won’t be until some time in March. In the meantime, the shelter can use all the help and donations they can get!

See The Grand Babies In Action!

The post Dog Leads Woman On Late Night Adventure In Hopes Of Saving Her Puppies appeared first on iHeartDogs.com.

Police Officer with PTSD Forms an Instant Bond with His New Service Dog!

Nurse Cares For Veteran’s Service Dog During His Hospital Stay

Spread the love Right before the coronavirus lockdown was in place, Joe Tasby was admitted to Southern Hills Hospital in...

Sundowners Syndrome In Dogs: Is Your Senior Dog Suffering At Night?

Spread the love Does your senior dog seem confused or restless in the evening? Maybe she paces the floor or...