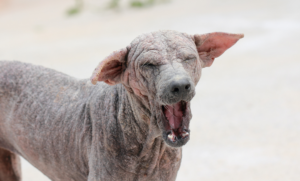 When your dog gets ill, do you worry about catching it? Dr. Kathryn Primm, DVM, owner and practicing veterinarian of Applebrook Animal Hospital shares eight diseases you and your dog can give each other.

Rabies is a deadly disease caused by a virus that attacks the nervous system. The virus is secreted in saliva. It is usually transmitted to people and animals by a bite from an infected animal. So if an animal is suspected of having rabies, notify your local animal control and/or health department. In unvaccinated humans, rabies is almost always fatal after neurological symptoms have developed.

Dermatophytosis or ringworm is a fungal infection of the skin. Although cats are more likely to be asymptomatic carriers, it is also common in dogs.  Animals are often blamed for infections in children, but ringworm is also found in soil where children play.

Salmonella is a bacteria found in contaminated and undercooked food.  It often makes people and dogs very sick. Some common GI signs include abdominal cramps, diarrhea and bloody stool. So I discourage feeding raw meats to your pup. To make poultry safer for pets and people, cook it to a minimum temperature of 165 degrees.

This is a bacterial infection that is spread through contact with the urine of an infected animal. Wildlife, such as mice and rats, are potential sources. Contaminated standing water is also thought to be a source. Infected dogs are also a potential source for humans handling their urine. So if your dog is sick with fever, lethargy or jaundice, please contact your vet immediately.

The post 8 Potentially Deadly Diseases You Can Get From Your Dog appeared first on iHeartDogs.com.

Spread the love You may remember that an explosion rocked several Baltimore homes back in October. Several people tragically lost...

Spread the love Liz Haslam’s life has always revolved around dogs. Growing up, her mother bred West Highland Terriers, and...

Spread the love When our dogs are in pain, we rush to find out what’s wrong. We’d do anything to...