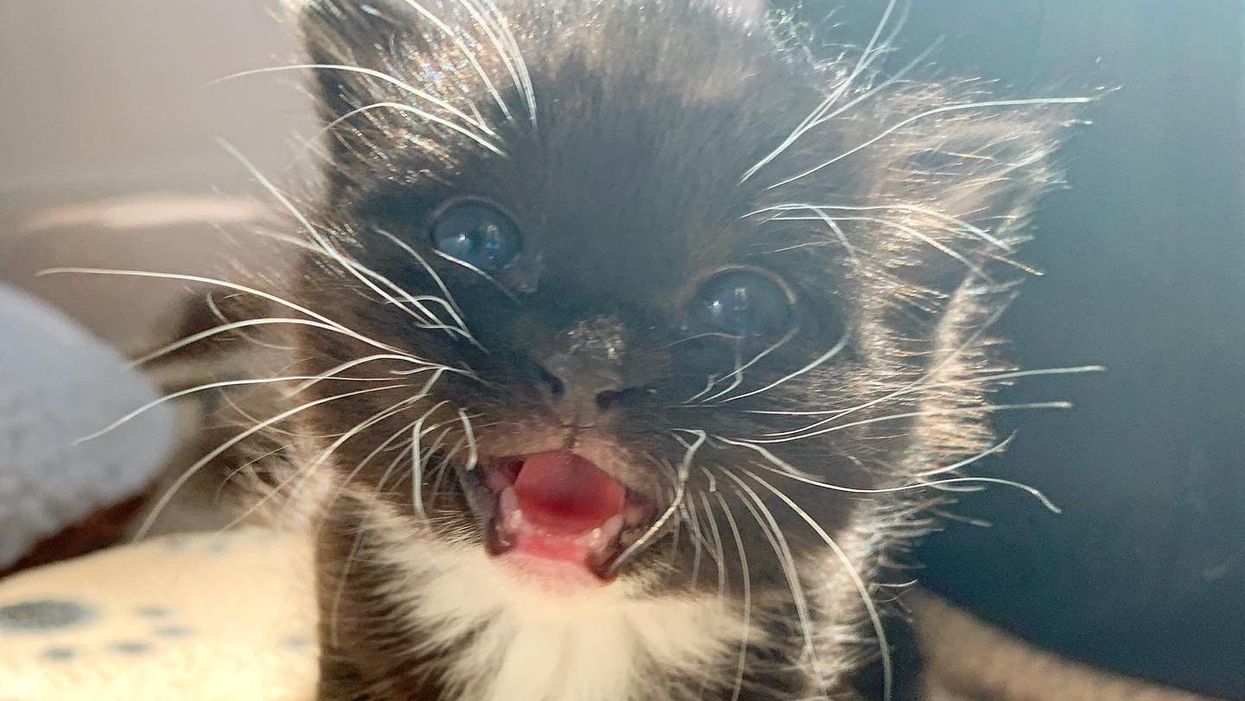 A tiny kitten with a big voice trilled her way into the hearts of a family. 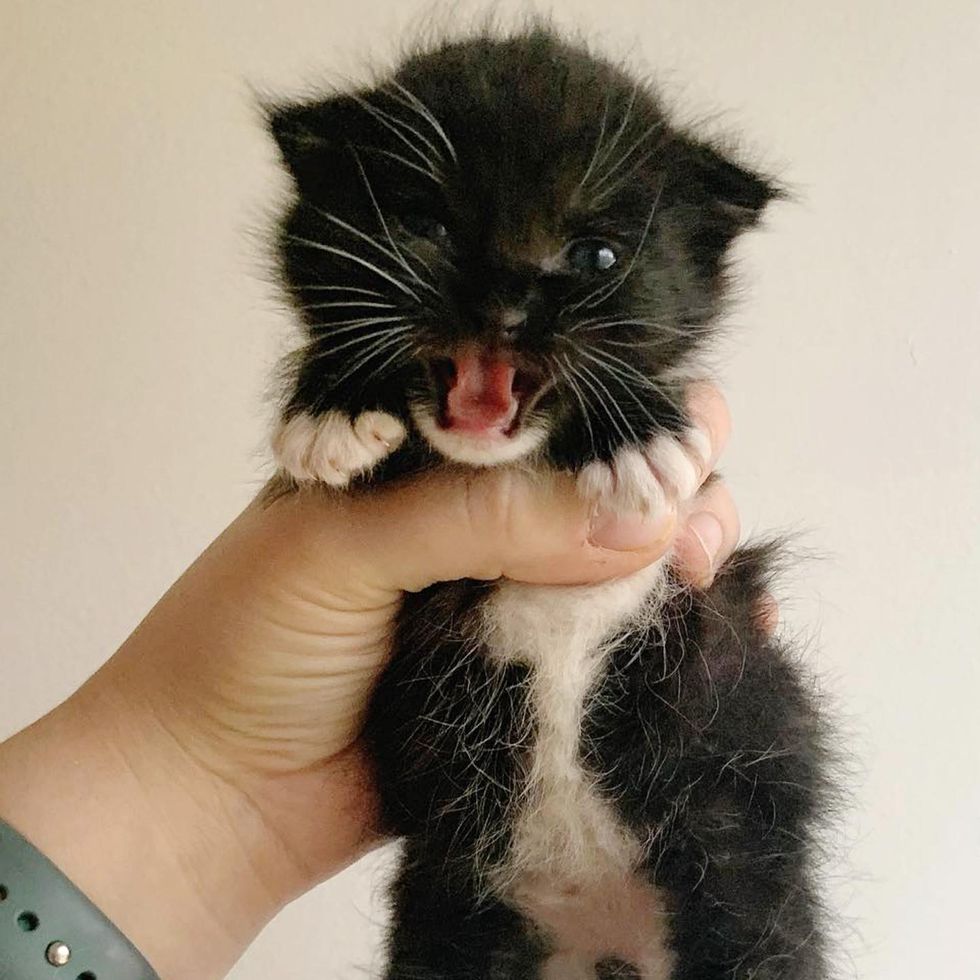 Sarah Kelly, founder of Murphy’s Law Animal Rescue (in North Carolina), was contacted about a tuxedo kitten found outside all alone. A Good Samaritan heard her squeaky meows and located the little ball of fur in an AC unit outside an apartment building.

It was rainy that day and the kitten was crying for her mother who never came back to her. “Her cries saved her life. She was brought to us, and she didn’t stop meowing (giving commands),” Sarah shared with Love Meow.

It was clear from the start that the tuxedo was born a princess, displaying so much sass at a young age. She was a chatterbox and determined to get what she wanted.

“She was never shy and so demanding of affection and attention.” 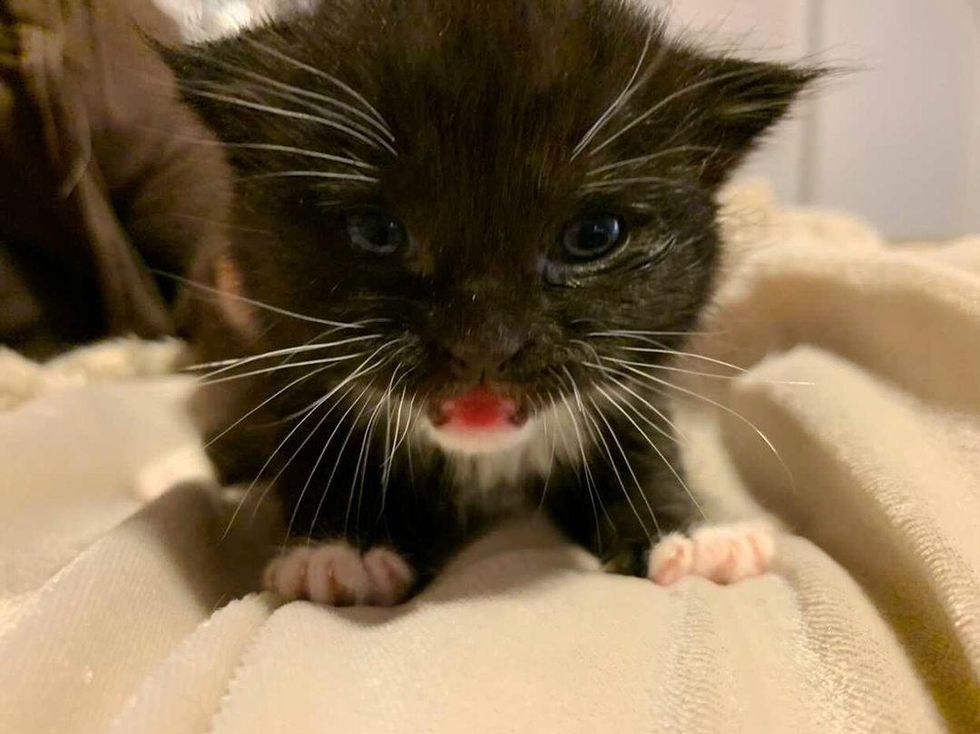 She has a lot to dayMurphy’s Law Animal Rescue

The kitten named Peep (after the Easter marshmallow candy) didn’t hesitate to tell her foster mom what she thought about the bottle when she was first introduced to it. She protested against it and refused to eat from it, but Sarah kept encouraging her.

Once she decided to latch, it became one of her favorite things. “She would drink her bottle and then roll over and wiggle on her back for belly rubs,” Sarah shared with Love Meow. 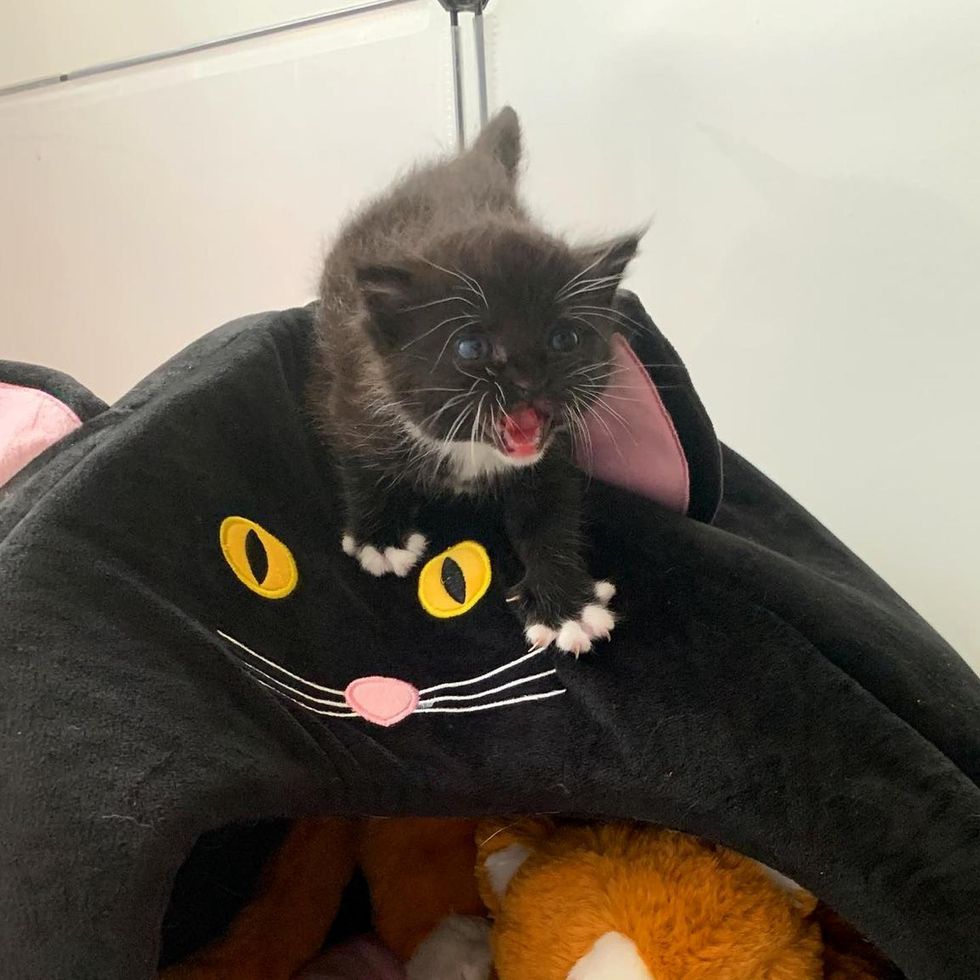 The tuxedo was adamant about having a constant companion. When she was placed back in a playpen, she immediately spoke her mind in trills and squeaks, urging to be picked up again.

Sarah would spend extra time hanging out with the kitten while the little tux marched around her pen, as if she was surveying her little kingdom.

“She loved giving face kisses and nuzzling into our necks.” 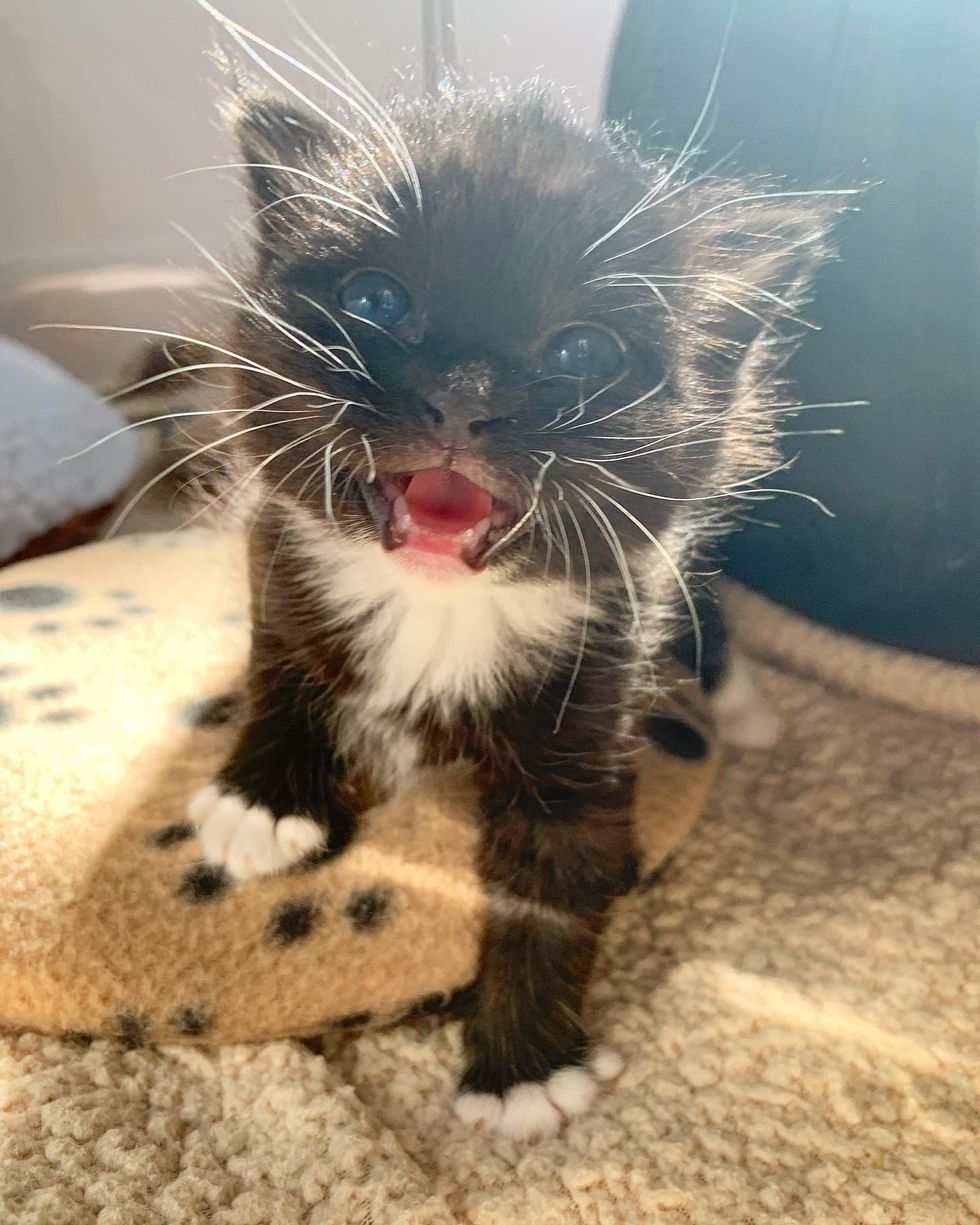 Knowing that Peep could benefit from having a friend, once she was medically clear, Sarah introduced her to a litter of younger kittens who happened to be tuxedos just like her.

They hit it off right away, and Peep quickly assumed the role of big sister. 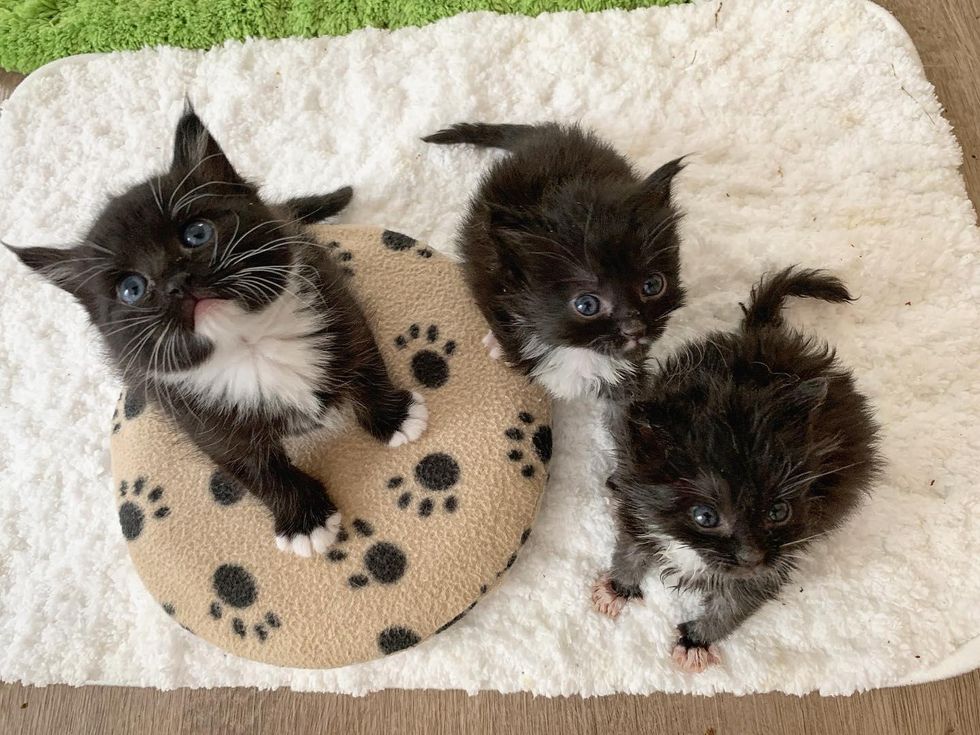 She continued to chirp and meow the cutest way she knew how, and swooned every person she came across. When she was big enough for adoption, she quickly charmed her way into the hearts of a family.

Yesterday, Princess Peep officially graduated from foster care and moved in with her forever humans.

“It couldn’t be a better family! They will spoil her rotten for the rest of her nine lives! Peep will have a fur brother, Cory, and live a glorious life full of snuggles, sneak attacks, and days spent purring in laps and playing with toys,” Sarah shared. 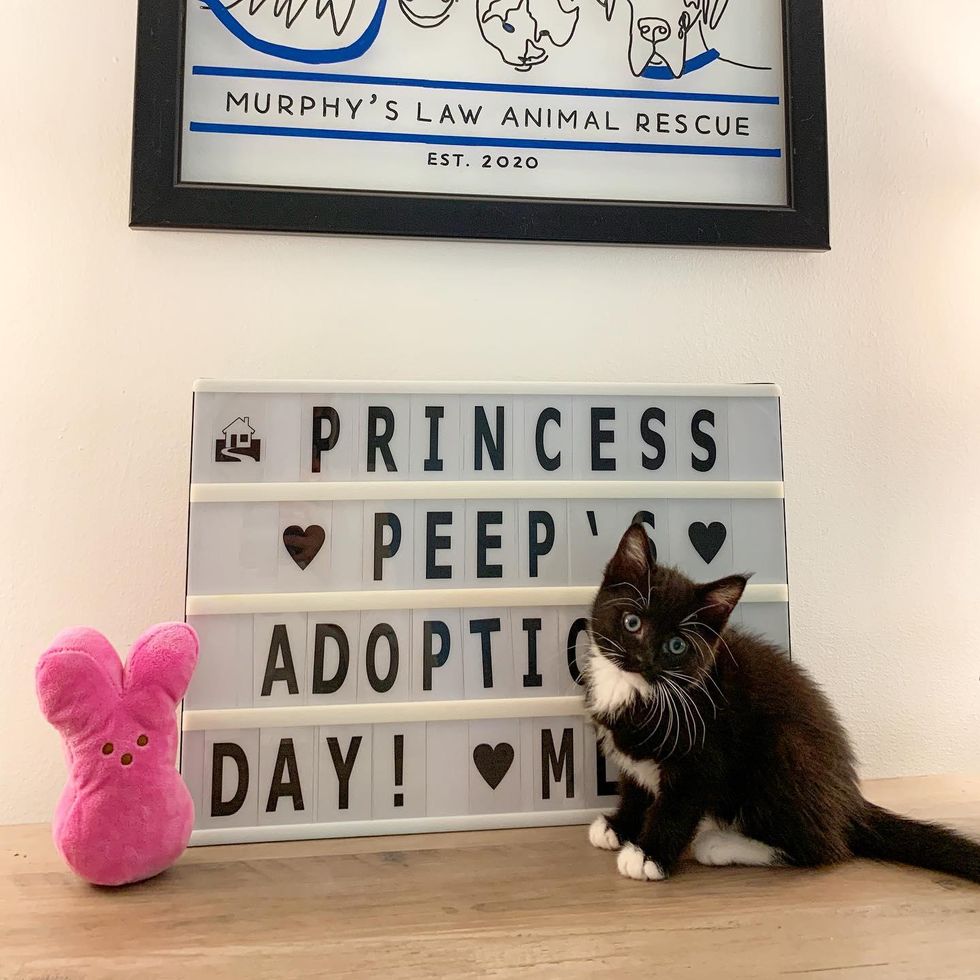 “We are so excited for Peep’s happy ending and new beginning with her new parents!” 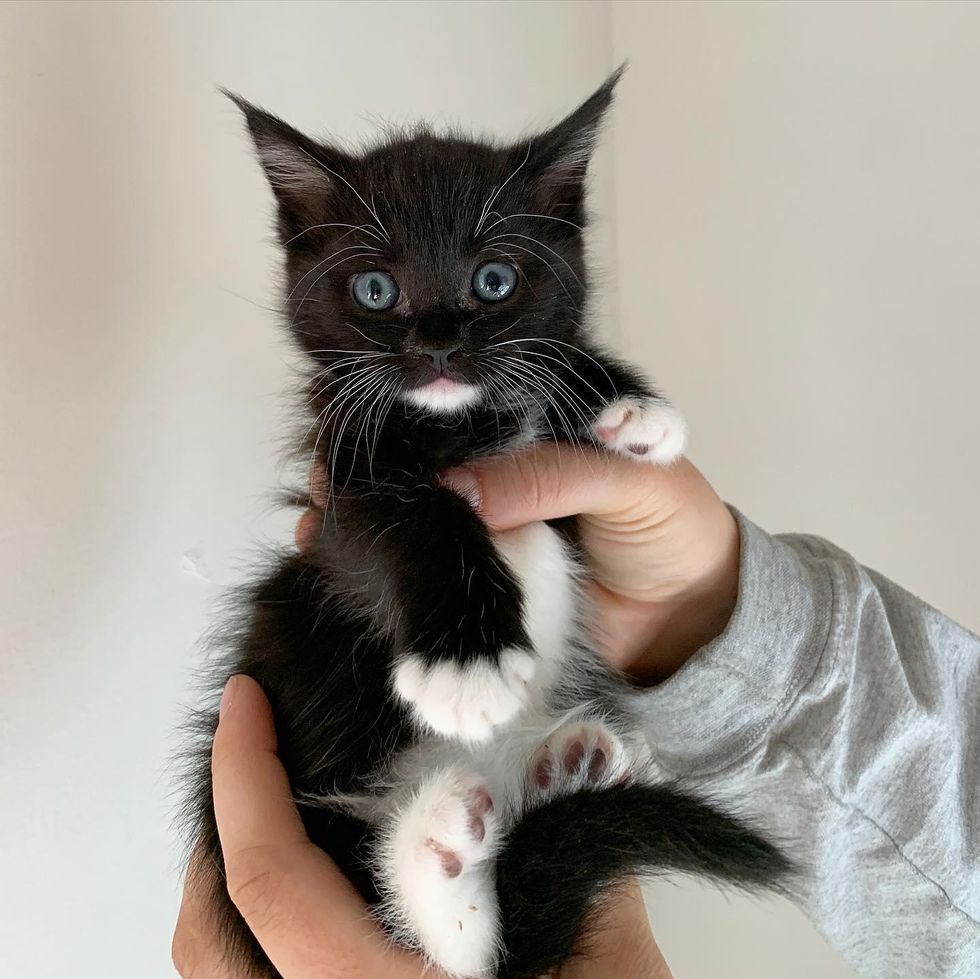