Four decades ago, ornithologist David Willard heard from a colleague that birds had been colliding with a recently remodeled convention center on Chicago’s lakeshore. “One morning, totally out of curiosity, I wandered down there,” says Willard, a collections manager emeritus at the city's Field Museum. After Willard found lifeless birds scattered around the building, he began visiting almost daily to collect and record the night’s casualties. He has since amassed a collection of more than 40,000 birds, all found dead on the grounds.

When Willard started recording bird strikes at the McCormick Place Lakeside Center, he suspected that reflective glass and weather might impact birds, but didn’t consider what role the lighted windows might be playing. Then, in 1999, something changed: the building’s lighting schedule. Instead of keeping all windows aglow 24 hours a day, even at night, McCormick Place switched to an intermittent lighting regime, switching some lights off in the evenings. On some mornings Willard found hundreds of dead birds, while on others he found almost none. “It was sort of instantaneous that I was aware that on those [unlit] nights, there were fewer birds,” he says. Suspecting a link, Willard started noting which indoor lights were left on at night.

A new study published in June combines Willard’s decades of surveys with weather records and radar data to pinpoint the impact of lighted windows on migrating birds. By turning off just half the lighted windows during spring and fall migration, the study revealed, fatal bird collisions could drop by 60 percent.

The results confirm what bird conservationists have suspected for many years, but it’s rare to have such a long, detailed dataset as the one Willard created. “As an ecologist, I'm not always faced with such clear results,” says Benjamin Van Doren, a researcher at the Cornell Lab of Ornithology and co-author of the study. “It felt like the data were kind of shouting at you.”

Most of North America’s migratory birds make their journey under the cover of night, relying on the glow of the stars to guide their way. Previously dark skies are now polluted with artificial light which can lure migrating birds from miles away and skew their millennia-old migratory routes. Once birds are drawn into cities and neighborhoods, the combination of artificial lights and transparent glass can become disorienting and deadly.

“There’s just something about that light cue that is incredibly attractive,” says John Rowden, senior director for Audubon’s Bird-Friendly Communities program. The situation at McCormick Place is not uncommon. Experts estimate that building collisions kill around 600 million birds each year in the United States, making window strikes the leading human-driven cause of bird deaths after feral cats. 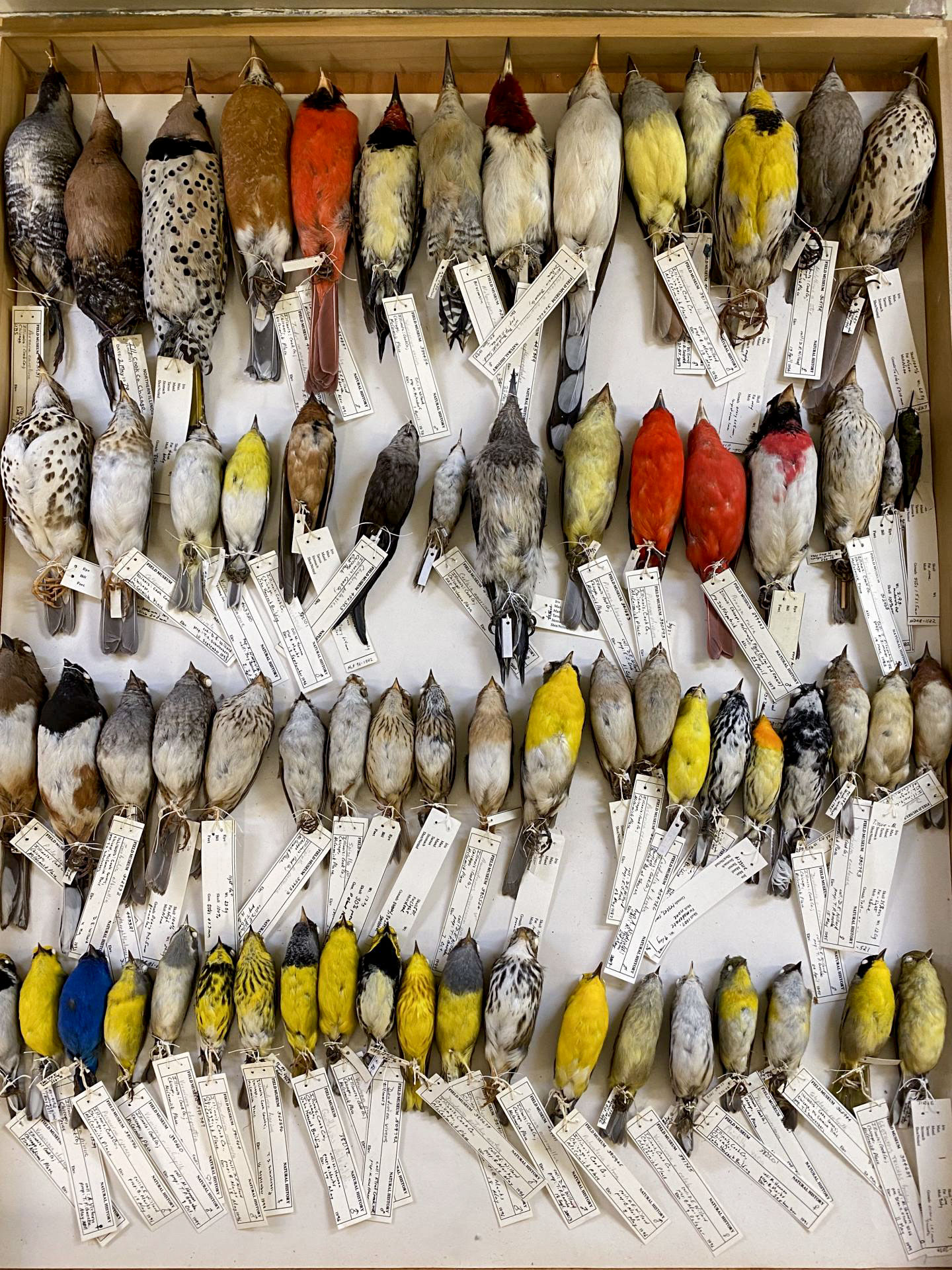 A drawer of birds in the Field Museum’s collection killed crashing into the city’s windows. Photo: Ben Marks/Field Museum

When the convention center started varying lighting at night 20 years ago, “it was some of our best early evidence for the power of light reduction to also reduce collisions,” says Joanna Eckles, coordinator of the Bird City Americas program at American Bird Conservancy, who was not involved in the work. Other studies have examined the link between light and collisions, she says, but this analysis “takes that research to a whole deeper level.”

To untangle the role of light in glass strikes, Van Doren created a statistical model that included factors such as wind speed and direction, cloud cover, moonlight, and bird migration intensity. Van Doren incorporated Willard’s last two decades of data—11,567 fatal collisions between 2000 and 2020—into the model, which revealed that illuminated windows were the biggest predictor of collisions. Other factors which also increased window strikes include the total number of birds in the sky on a given evening, and windy, moonless nights.

Artificial lights are especially enticing when they aren't competing with the moon’s glow.

Van Doren suspects artificial lights are especially enticing when they aren't competing with the moon’s glow. Turning off lights in half of the McCormick Place building windows, the authors found, reduced strikes by six times in the fall and by 11 times in the spring.

Though the link between artificial lights and window strikes isn’t a surprise, this study shows that “every little bit matters,” says Connie Sanchez, manager for Audubon’s Bird-friendly Buildings program. Sanchez is often approached by community members who wonder what difference a few lights could make, and work like this gives her concrete data to point to, she says. It also provides a stronger scientific foundation for the multitude of Lights Out initiatives across the country, which encourage people to switch off excess lighting during migration seasons. Sanchez says it’s important to remember that window strikes aren’t isolated to glass sky-scrapers—nearly half happen at home windows. By opting to switch off lights in empty rooms, drawing the shades, or put outdoor lights on timers, anyone can contribute to reducing window strikes.

Many window strikes also happen in the middle of the day when artificial light isn’t present, so switching off lights alone won’t solve glass collisions. Until buildings begin to incorporate bird-safe designs and glass, collisions will keep happening. Willard says he’d like to work with McCormick Place, and other buildings, to reduce window strikes, but they haven't taken him up on his offer yet. Because the convention center lighting dropped dramatically at the beginning of the coronavirus pandemic, Willard says they’re collecting fewer dead birds than ever before.

“It's very clear that light causes bird collisions, and that if we can turn off lights, we can save birds,” Van Doren says. “There's still a lot we can and need to learn, but we don't have time really to collect every last bit of data before we take action.”

Guardians That Protect Boreal Land Get Funding from Canadian Government

Spread the love Land Needs Guardians. It’s a statement with which we would all likely agree. The idea of stewardship...

Spread the love There were no busloads of tourists vying for Golden Gate Bridge views in the San Francisco Bay...

Spread the love Each spring and fall, an estimated 1 billion birds migrate through the Pacific Flyway, which snakes down from...