It’s tempting to compare bird migration to marathon running. In both, participants prepare intensely and undergo an extreme test of endurance. But the similarities stop there. Though marathon runners push the human body to its limits—during the 26.2-mile race, core temperatures spike to 102 degrees Fahrenheit and the heart pumps three to four times more blood than usual—birds radically change their bodies and their metabolism for the main event. In just weeks or months, they undergo physical transformation unmatched by human gains from years of training. To fly vast distances between breeding and wintering grounds, birds can shrink their internal organs, rapidly gain and burn through fat stores, barely sleep, and more.

These are incredible abilities, but they come with tradeoffs. The energy required to fly hundreds or thousands of miles in a short span leaves birds with little room for error during migration, and vulnerable to natural and human-caused threats. In North America alone, an estimated 2.6 billion birds disappear between fall and spring migration every year. Researchers pin many of these losses on migration, when birds must survive storms and cold snaps, navigate skyscrapers and other buildings, avoid predators, and successfully forage for food or else fail to complete their journeys.

Migration is perilous, but it’s also wondrous. Here are some of the incredible ways birds sculpt their bodies for their journeys.

A bird’s first inkling that it’s time to shift into migration mode comes from seasonal changes in its surroundings, says Paul Bartell, professor of avian biology at Penn State University. When the days shorten at the end of summer, birds undergo hyperphagia: They eat excessive amounts of food for two weeks or more to store fat before migration. During this time, birds gorge on high-energy berries and fruits loaded with carbohydrates and lipids, which are stored as fat.

Birds’ reliance on fat is unusual in the animal kingdom. “It's remarkable that they're using fats as fuel,” says Scott McWilliams, professor of wildlife ecology and physiology at the University of Rhode Island. People, for example, rely primarily on carbohydrates for endurance activities because our system can efficiently convert them to usable energy. But for birds, fat makes sense. Fat is lighter and less bulky than carbohydrates and protein—important for lightweight, small-framed bodies that must stay aloft by wingbeat. Plus, fat contains more energy than carbs. “You get the most energy per gram that you store, if you want to fly long distance,” McWilliams says. As they fly, birds can replenish fat by taking breaks to refuel. This is why it’s so important to grow native plants that produce the lipid-rich berries birds need.

Ruby-throated Hummingbirds are best known for packing on the grams: Most double their body weight in fat, or more, before embarking on migrations. Some even gain close to half that in just four days. They need it, since their metabolism is one of the highest of any animal on Earth. They require the human equivalent of over 150,000 calories every day to power their fast-moving heart and wings, which can beat 1,000 and 3,000 times per minute, respectively. That fat accumulated before migration is burned in a steady release of energy, ideal for the 2,000-mile journey many Ruby-throated Hummingbirds make twice a year. 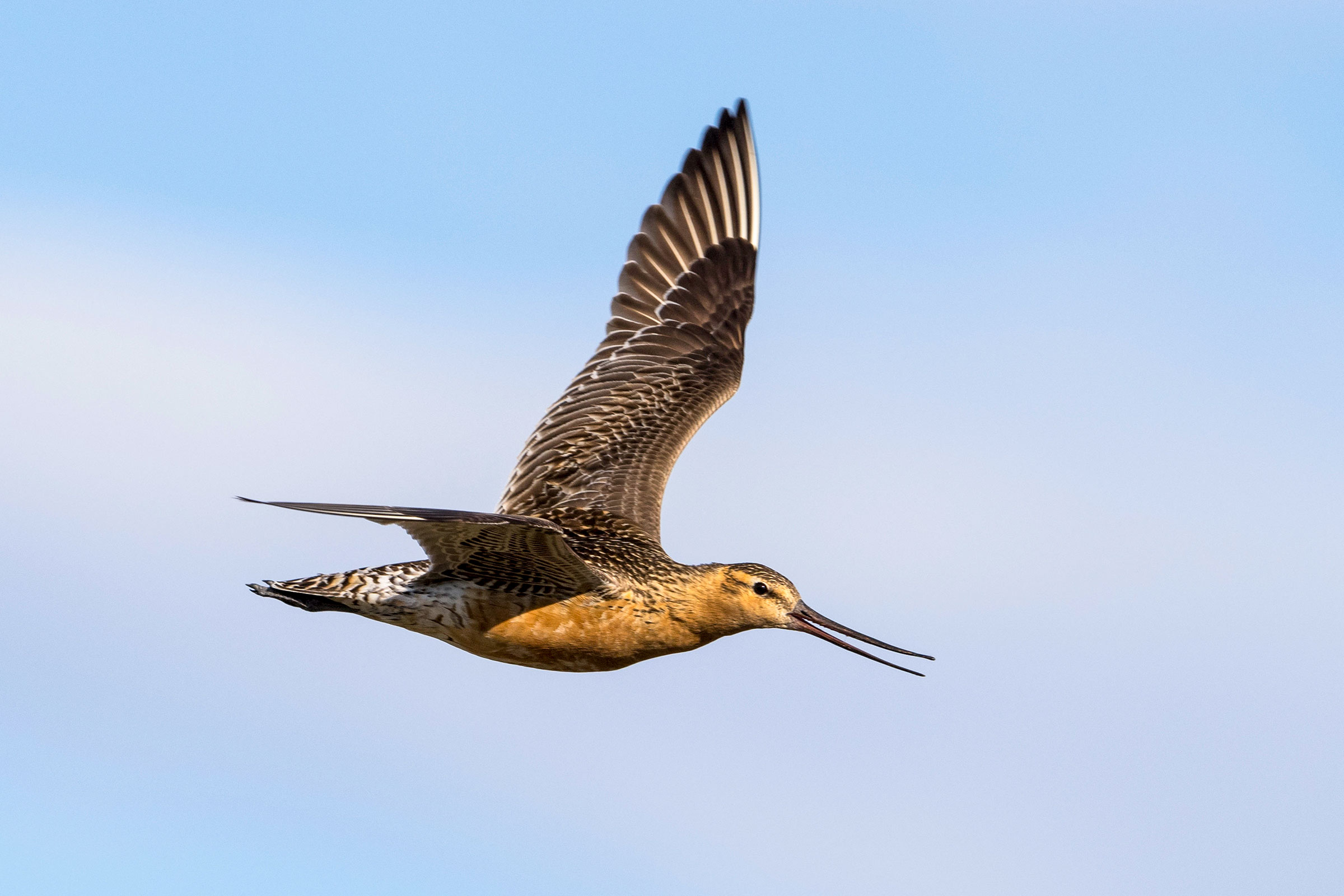 To fly 6,800 miles nonstop from Alaska to New Zealand each fall, Bar-tailed Godwits absorb parts of their digestive tract to make room for more fat to fuel their journey. Photo: Tom Ingram/Alamy

All that fat added on to a bird’s small frame can’t just sit anywhere—it must be distributed properly. To make it all fit, many birds are able to shrink and grow their internal organs. Take the Bar-tailed Godwit, one of the bird world’s most intense migrators, flying 6,800 miles nonstop from Alaska to New Zealand each fall. To make room for energy-rich fat, godwits absorb into their body 25 percent of the tissue comprising their liver, kidneys, and digestive tract. This happens through a natural cellular process that lets the body recycle and clean up its cells and tissues called autophagy (which means "self-eating" in Greek). Godwits also increase the size of their heart and chest muscles to distribute extra energy and oxygen to these highly active areas mid-flight.

“Flying is the most energy-intensive form of locomotion,” McWilliams says. “But it's also more efficient if you want to go farther, faster. You actually get better fuel economy when you use fat as fuel for a flying animal compared to a runner.”

Birds also undergo organ transformation during hyperphagia. While gorging on berries and bugs to gain weight, songbirds like Blackpoll Warblers expand their digestive tract to process more food, and quickly shrink and re-absorb parts of the same system during migration as they burn fat. According to McWilliams, this keeps energy focused on the most important flight muscles, reducing any need for frequent fueling at stopover sites.

The need for sleep might be a barrier to human endurance, but for birds it’s just another physiological rule to break. During migration, a neurological shift instigated by the changing season forces birds to adapt to nocturnal habits and sleep less. How do birds rest while in mid-air? Very quickly. Swainson’s Thrushes, which undertake 3,000-mile migrations from Central and South America to northern Canada and Alaska, enter a sleep-like state for about nine seconds at a time. They keep one half of their brain awake to avoid predators or mid-air collisions while the other half rests.

The neurological change from breeding- and wintering-season sleep habits to migration sleep is as crucial to bird endurance as metabolic changes, says Bartell. “They are somehow resilient to all this increased fat and the detrimental effects of staying up almost all night,” he says. “And they actually performed better than if they were in a non-migratory state.”

Consume Their Own Muscles 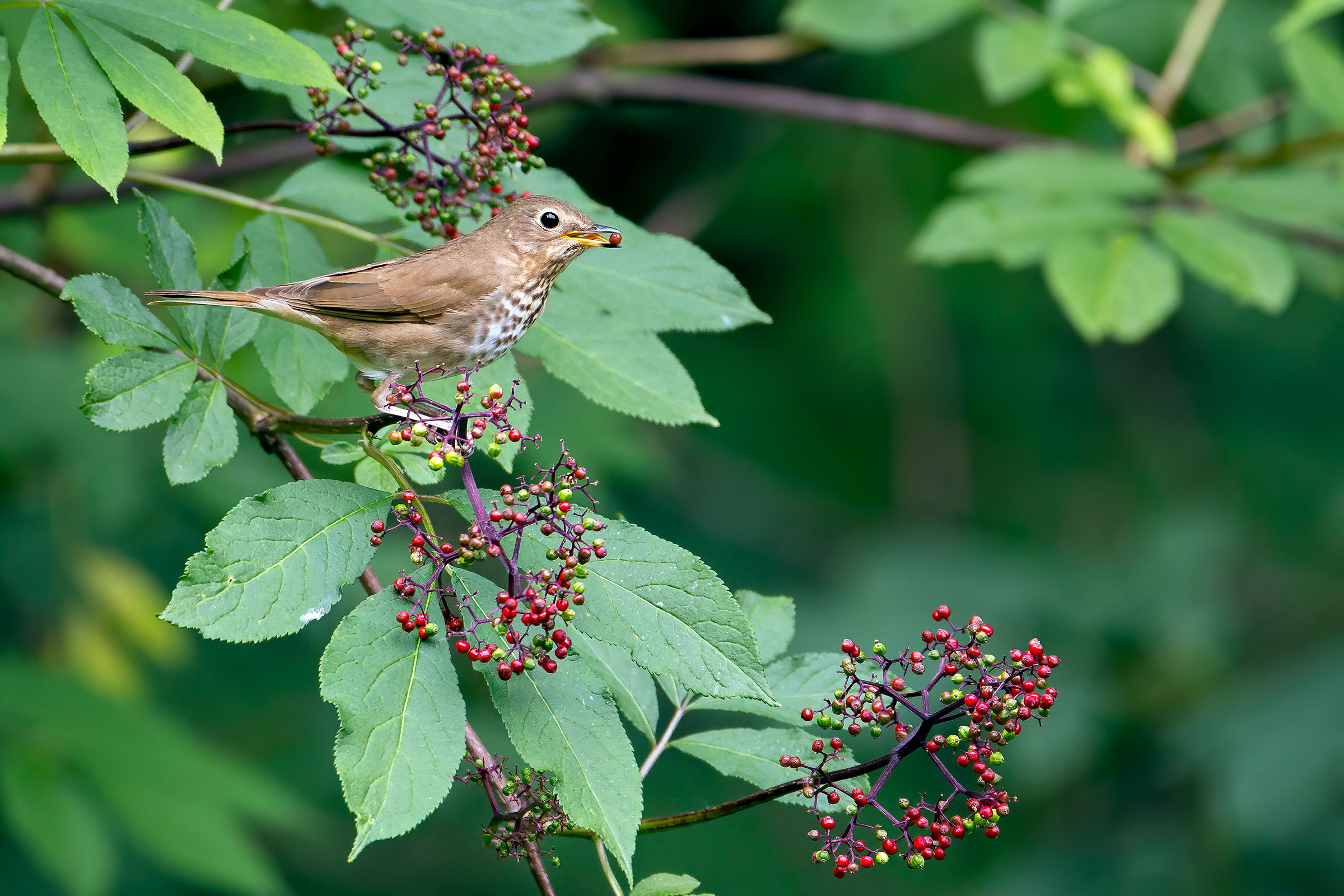 Swainson’s Thrushes will burn their own muscles as energy if it’ll get them to a food-rich rest stop, maybe one with Red Elderberries pictured here. Photo: Mick Thompson

When endurance athletes exhaust their carbohydrate and fat supplies, they face dehydration and starvation. For humans, those needs can put an end to any athletic performance. But birds have a last-ditch backup: They can burn their muscles for energy, a trick that some birds use to their advantage. Experiments done in a wind tunnel in 2011 revealed how Swainson’s Thrushes—typically flying up to 200 miles in a single stretch during migration—even burn muscle unnecessarily so they can fly farther and reach the most beneficial stopover sites. It is risky, though, if they can’t recover that lost muscle after migration.

Revert to Their Previous Form

Once birds reach their destination, they need to regain their organ function and shape, and refuel now-emaciated fat stores. It’s an urgent task during spring migration because soon as they reach their breeding ground, birds must do the hard work of breeding: attracting mates, and producing and raising hungry young chicks—all while still taking care of themselves. “Essentially, they need to instantly start making territories and reproducing,” Bartell says. “If they can’t get food within a couple hours or are delayed after landing, they can actually starve to death.”

The stakes are lower during fall migration because birds don't need to breed upon landing, plus the warmer, tropical areas in the south tend to have more food available. “All they're trying to do usually is maintain the body mass at a certain level and get through the winter,” McWilliams says. Birds on average need to restore between 17 and 23 percent of their body weight in fat upon arrival, and also account for significant protein and water loss depending on their species and migratory pattern.

It's an astounding balance to maintain while already undergoing spectacular trips across the world. But if we've learned anything about birds and migration at this point, it's that we shouldn't be surprised by anything.