Around the West, Greater Sage-Grouse chicks are pecking their way out of eggs and beginning to explore their new homes on the sagebrush steppe. And while the bird’s overall numbers are in worrying decline, some areas may have more downy chicks milling about this year, thanks to ranchers and public land managers who have strategically removed trees to restore sagebrush habitat.

It may seem counterintuitive to cut down trees to boost wildlife populations. But a new study in Ecosphere shows that the growth rate of sage-grouse populations in southern Oregon was significantly greater—on average 12 percent higher—in places where junipers had been removed versus neighboring landscapes where trees remained. “We’re buying instant habitat for sage-grouse when we cut encroaching trees on a scale that matters and in places where sagebrush plant communities are still intact,” says Andrew Olsen, who led the research at Oregon State University.

The expansion of woody plants into grasslands and shrublands threatens biomes around the world. In the American West, this proliferation of native trees—species such as piñon pine, western juniper, or eastern redcedar—was accelerated by European settlers who upended natural fire regimes by overgrazing native grasses or suppressing wildfires. “Historically, native trees like juniper were periodically pushed back to rocky ridges by fire,” Olsen says. “Anything that reduced fire frequency contributed to their expansion.”

In the West, 90 percent of piñon-juniper expansion has occurred in shrublands adjacent to these wooded areas, threatening 350 sagebrush-associated plant and animal species. The northern Great Basin is experiencing particularly alarming tree encroachment: Satellite data show that 1.1 million acres of new piñon-juniper forests have taken root in the region’s sagebrush sea just since 2001, and they continue to expand.

Encroaching conifers replace native perennial plants, create hotter and more severe wildfires, and suck up precious groundwater. They also push out some birds that evolved in wide-open landscapes. Research has shown that sage-grouse avoid breeding or nesting in an area once there are more than a few trees per acre. Scientists suspect that’s because trees provide hiding places for predators like ravens or coyotes that snatch up the chicken-size ground-dwellers and their chicks.

Since 2010, private landowners and public land managers have focused on cutting trees that are edging into remaining high-quality sage-grouse habitat with help from the Sage Grouse Initiative, a collaborative West-wide conservation effort led by the Natural Resources Conservation Service (NRCS)—part of the U.S. Department of Agriculture—that includes partners like Audubon. 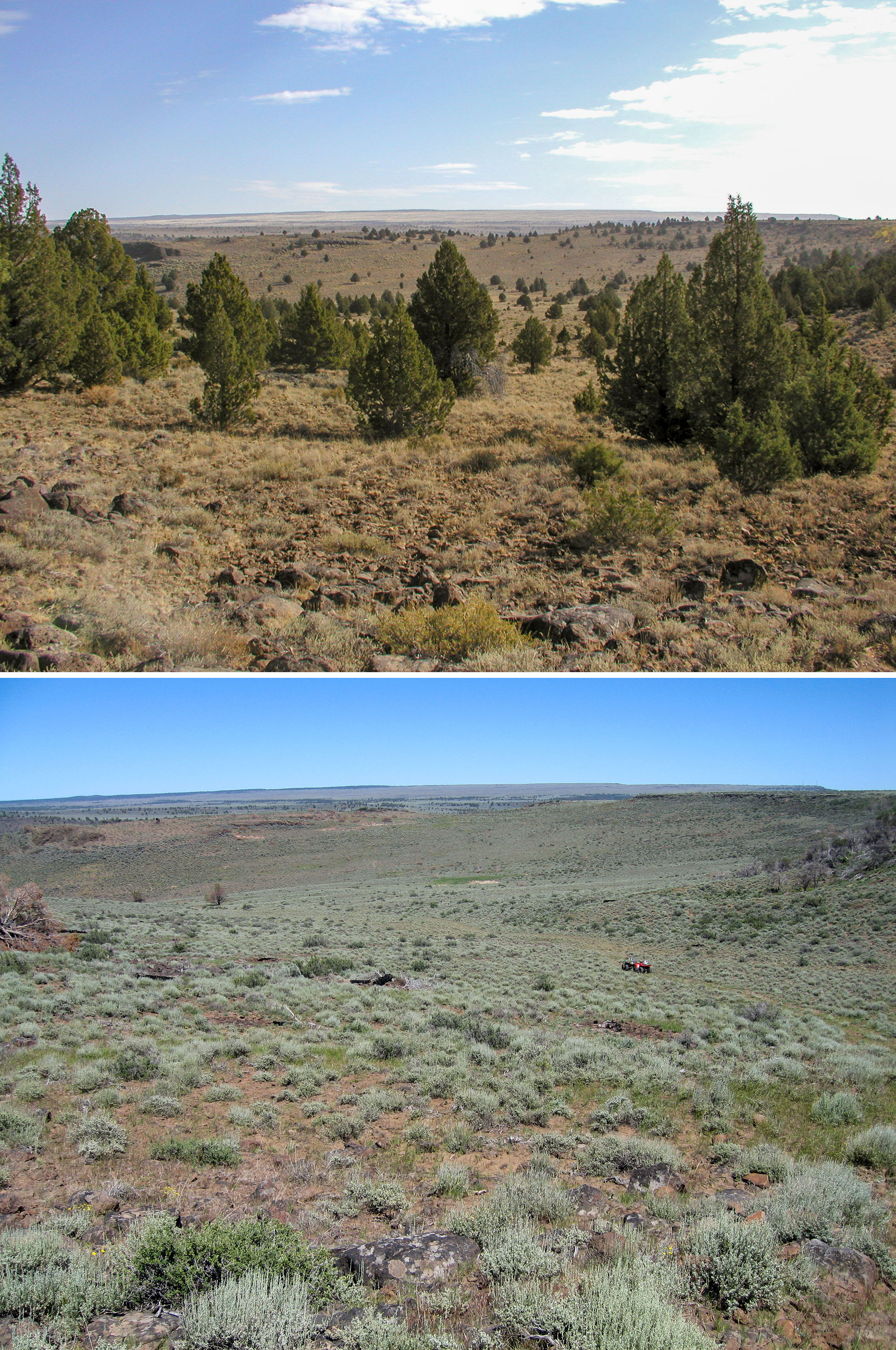 Before and after conifer removal in the treatment area in southern Oregon. Photos: Todd Forbes/BLM

“Where we find great sagebrush, we find greater numbers of sage-grouse. No surprise there,” says Brian Rutledge, director of Audubon’s Sagebrush Ecosystem Initiative. “It's important to focus on conserving sagebrush strongholds, then work our way out from there.”

One such stronghold is in the foothills on the eastern slope of Oregon's Warner Mountains, where ranchers, the NRCS, and the Bureau of Land Management (BLM) have restored 54 square-miles of sagebrush habitat—close to 35,000 acres—on public and private land since 2010 through juniper removal. Seeing an opportunity to answer questions about how cutting conifers would affect wildlife, scientists at the BLM and NRCS reached out to Oregon State University to help monitor the outcomes along the way.

“The Warners provided a perfect petri-dish landscape for understanding the long-term effects of conifer expansion on sage-grouse and other species,” says Jeremy Maestas, an ecologist with the NRCS and a co-author on the study.

Maestas and other researchers have published several studies from this living laboratory over the past decade showing that sagebrush-dependent birds can benefit from well-planned conifer-removal projects. They’ve reported that the abundance of sagebrush-dependent songbirds like Brewer’s Sparrow doubled after juniper removal allowed native shrubs and grasses to flourish. And they’ve shown that sage-grouse avoid conifers and that removing the trees improves sage-grouse nesting success.

But the newest study from the Warner Mountains provides the first empirical evidence that tree removal can help grow sage-grouse populations, its authors say. “We have lots of evidence documenting the demise of sage-grouse, but nothing showing a positive population response to habitat management like what’s been documented in Oregon,” Maestas says.

The researchers used transmitters to track 417 sage-grouse hens in the Warners over eight years. They were careful to mark birds from two different areas: a 109,000-acre treatment site where landowners and the BLM selectively removed trees from 2012 to 2018, and a nearby 82,000-acre control site where no trees were cut. 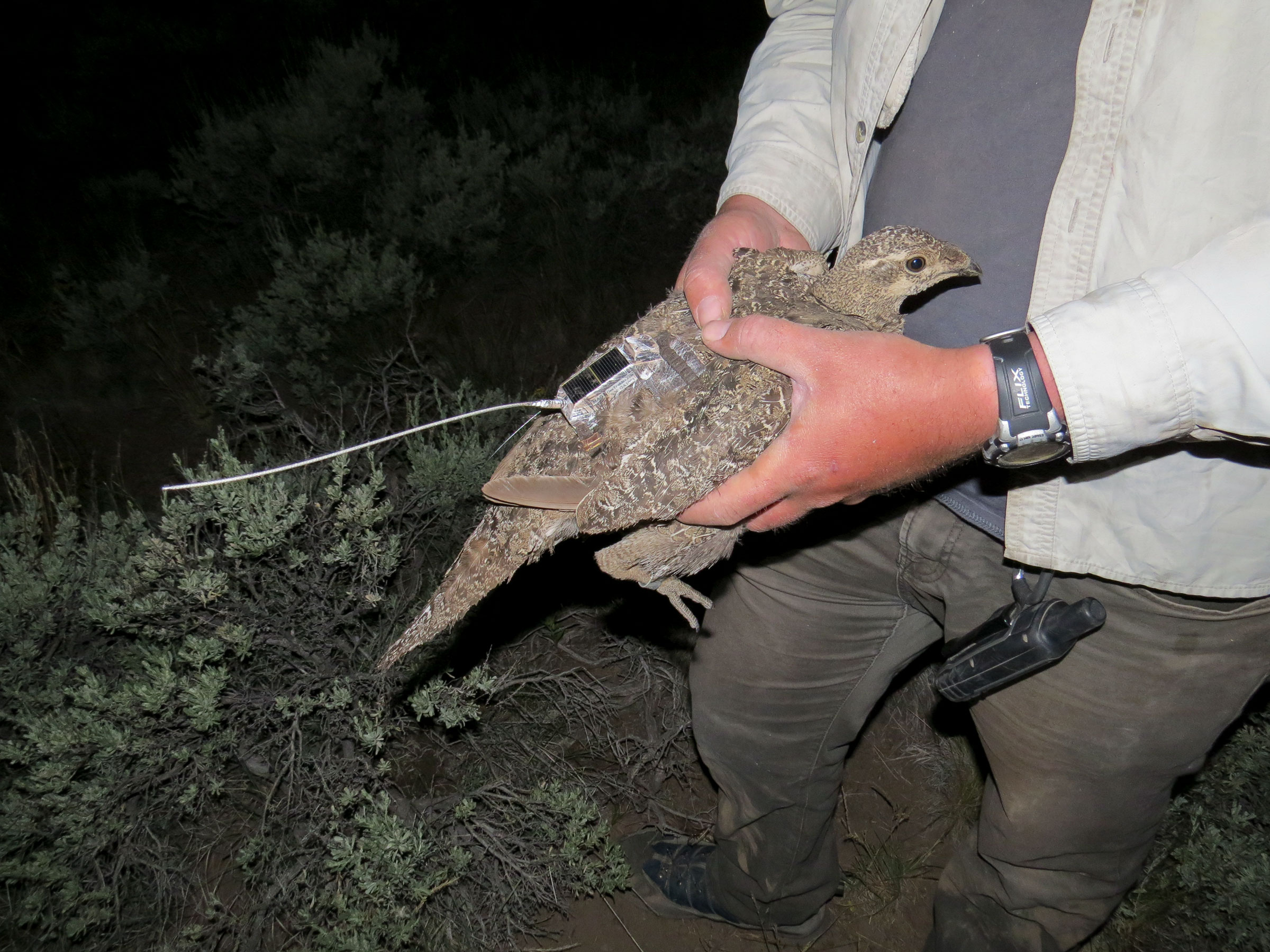 Using the transmitters to locate the birds, Olsen was able to assess the survival rate of hens as well as track their annual nest success, count their chicks, and determine each brood’s survival rate. Next, he combined that information with bird counts from the same timeframe to build a model that compares trends in grouse populations in the areas with and without tree-cutting.

The findings from the Warner Mountains don’t mean that land managers should indiscriminately cut down trees in the name of saving sage-grouse, the researchers say. The project partners removed conifers with chainsaws, as opposed to methods that create more ecosystem disturbance, like broadcast burning or chaining. “This preserves the shrubs so that wildlife can use the habitat immediately,” Maestas says. The results have been so promising that the NRCS made the practice a priority in its sagebrush conservation vision for the next four years, he notes.

Unfortunately, saving sagebrush country isn’t as simple as removing some trees. A host of other threats faces the biome. Since 2000, wildfires fueled by invasive cheatgrass have scorched more than 20 percent of priority sage-grouse habitat in the Great Basin. Energy development has left its mark at a similar scale east of the Rocky Mountains, while conversion to crops continues to shrink sagebrush habitat in parts of Montana, Washington, and Wyoming. And the loss of relatively wet habitat like streambanks and meadows across the West further strains sage-grouse, which seek out such places to feed their chicks during the dry summer months. Combined, these factors have caused Greater Sage-Grouse populations to plummet by 80 percent since 1965, scientists for the federal government recently reported.

Still, rangeland conservationists are ready to use any tool that can help save this iconic bird of the West. “The key to restoring the kind of carrying capacity we once had for wildlife in the sagebrush ecosystem is creating a healthy understory of native plants,” Audubon’s Rutledge says. “Removing piñon and juniper can be one piece of that puzzle.”

Spread the love In 2019, scientist Crinan Jarrett was working a mistnet on a cocoa farm in Cameroon when she...

When to Expect Hummingbirds in Your Yard This Spring

Spread the love As warmer weather approaches, multitudes of migrant birds are on track for arrival in North America. Among them...

Spread the love One of the most exciting observations I made as a new birder was seeing a giant Great...