In 2008, Philip Stouffer found himself befuddled in the middle of the Amazon rainforest. It had been nearly 20 years since his last visit to the Biological Dynamics of Forest Fragments Project (BDFFP), a long-term study of rainforest fragmentation based at a protected 37,000-acre portion of the Brazilian forest about 50 miles north of the city of Manaus. His surroundings were as lush as he remembered, and old, tall trees testified to the ecosystem’s good health. So, he expected to spot some of the Amazon’s most elusive birds. But that wasn’t the case. “Rare birds were harder to find than we anticipated,” Stouffer, a Louisiana State University biologist, says. He spent the next eight years trying to confirm his observation that the area's birdlife had changed and to explain why it was happening.

Recently published in Ecology Letters, Stouffer and 10 co-authors proved his suspicion right. By re-surveying sites that earlier scientists studied in the 1980s, they found that the observed populations of 21 bird species declined within the protected and insulated BDFFP section of the Amazon rainforest over the past 40 years. Nine species, all insect-eaters, declined by over 40 percent. And another 10 bird species became so rare they had to be excluded from the statistical analysis altogether.

What’s particularly worrisome, scientists say, is that this forest was considered “untouched.” With the understanding that the Amazon rainforest as we know it was shaped by Indigenous peoples, “untouched” forests are patches of the forest that haven’t been affected by industrial interventions like agriculture, cattle ranching, dams, and roads. Biodiversity in those places is assumed to be rich and thriving, with little effect from modern society. The new study show that even the BDFFP—one of the Amazon’s best-protected tropical rainforest—is experiencing significant ecological change, including declines in wildlife populations.

“These populations that we would have thought were the best conserved on the planet within this extensive forest apparently are not,” says tropical ecologist Bette Loiselle from the University of Florida, who was not involved with this study. “To me, it raises so many more questions than answers.” Loiselle recently observed a similar pattern in the western portion of the Amazon forest in Ecuador: Since 2009 there has been a more or less steady decline in bird numbers based on her surveys with John Blake, a tropical bird ecologist at University of Florida.

Stouffer and his team ruled out a number of potential drivers of the bird losses, leaving them with one conclusion: climate change. Previous studies have shown that the Amazon rainforest’s tree composition has been changing as temperatures rise, and that both the dry and wet seasons are becoming increasingly extreme. These shifts could alter the food or shelter available for birds.

“Focusing on protecting these vast areas of forest is not the complete panacea that we imagined it would be.”

The findings have immediate implications for conservation practice. If seemingly untouched forests are losing bird species, then stopping deforestation is not the easy solution to biodiversity loss in the Amazon, Stouffer says. “Just focusing on protecting these vast areas of forest is not the complete panacea that we might’ve imagined it would be.”

The new study adds to growing evidence about strange changes in the deepest corners of the Amazon, which started emerging more than two decades ago. Climbing woody vines called lianas have been growing denser and stronger on “untouched” forest plots, one study found. The tallest trees in the forest are growing faster, another observed; apparently, the increasing quantities of carbon dioxide humans have emitted into the atmosphere are “fertilizing” the air. Meanwhile, recent evidence shows that in the last 50 years, pioneer, softwood, and evergreen trees are dying faster due to increasingly extreme droughts and rainfalls, observations predicted by climate-change models.

The new study adds birds to the list of changes in the Amazon rainforest. Although the research team didn’t start collecting data until 2008, when Stouffer had his epiphany about seeing few rare birds at BDFFP, they could study long-term trends thanks to previously collected data. Between 1980 and 1984, scientists had surveyed birds in 34 plots located nearly a mile from the forest edge. Stouffer and Vitek Jirinec, a Louisiana State University tropical bird ecologist, wanted to go back to the same plots and systematically count birds using the same methods the researchers did in the 1980s. Their prococols didn’t match perfectly: Some of the old plots are now cattle pasture, and in other cases the scientists couldn’t pinpoint some plots’ exact locations. Instead, they looked for 21 plots as close as possible to the original sites. Additionally, they sampled 15 plots of logged forest for comparison. 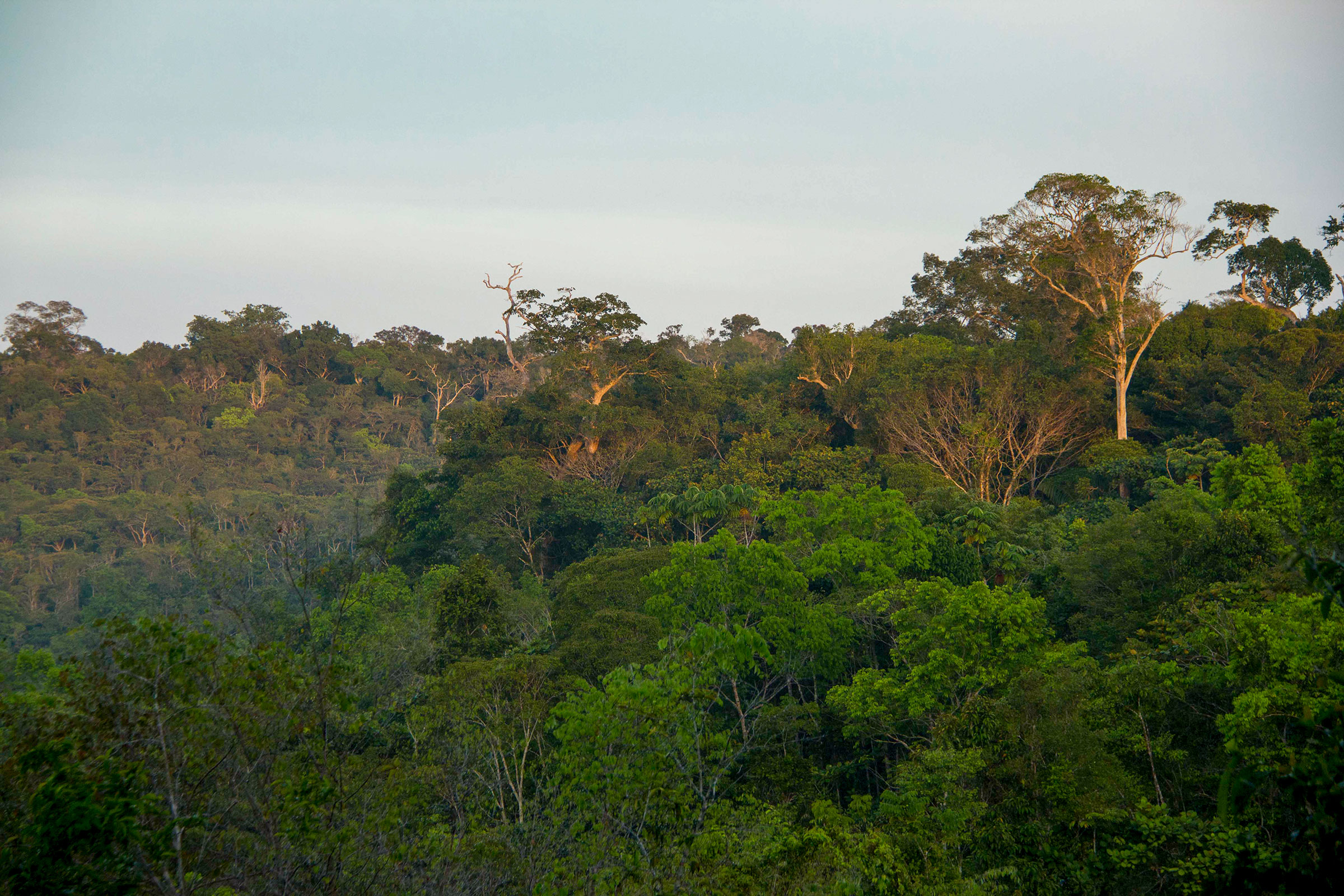 The Biological Dynamics of Forest Fragments Project area extends across a 37,000-acre portion of the Amazon rainforest in Brazil. Photo: Philip Stouffer

Using 39-foot-long mist nets, the researchers surveyed forest species from 2008 to 2016, noting every single bird that got caught in the net. Then they compared their modern data to the 1980s surveys. Unsurprisingly, the data showed a clear decline in most species between the “intact” patches, both old and modern, and the modern disturbed ones.

But an unexpected pattern also emerged: Birds declined through time between the supposedly untouched forests. Ten species in the 1980s data showed up so infrequently in the 2010s that they had to be excluded from the statistical analysis, including many birds of humid lowlands and seasonally flooded forests like Riverbank Warbler, White-necked Jacobin, and Black-faced Antthrush.

After processing the information for 79 species, the team reported the decline of 21 species of terrestrial and near-ground insect-eaters like Rufous-bellied Antwrens, Black-tailed Leaftossers, and Wing-banded Wrens in untouched forest through time. The observed populations of nine insectivores shrunk by 40 percent. Another 10 species, mostly hummingbirds, slightly declined, and 41 other bird species had stable populations. Seven fruit-eating species increased.

When the researchers started looking at explanations for the decline between old and modern primary forests, they didn’t want to assume it was climate change, Stouffer says. But “nothing else seemed to add up.” The landscape had remained fundamentally the same. The topography on the plots was similar. Degraded forest areas were too far away to affect the birds. The declining species are hard to spot and were too small to eat, so pinning the declines on hunting is “ridiculous,” he says. New human settlements hadn’t appeared nearby, so introduced predators, such as dogs or cats, seemed an unlikely answer, too. They wondered whether a new virus or bacteria could have killed the animals. But the birds that declined are spread out across the family tree, so it couldn’t be disease, either.

“So then we’re left with: ‘Well, what else has changed in this time?’ ” Stouffer says. They thought of the data on changing tree communities; Jirinec’s unpublished data indicated that temperatures had risen in their plots. “We have pretty good reasons to believe that [climate-change-related alterations] are happening and that they are pervasive enough that the birds are responding to them,” Stouffer says.

The exact mechanisms fueling the decline are still a mystery.

The exact mechanisms fueling the decline are still a mystery. Increasing temperatures could kill birds through heat stress or reduce their foraging time. Climate change could also alter their habitat. As tree composition changes throughout the forest, the leaf litter—that thick, cushiony layer covering the ground that feeds insects and herbivores—also changes. Perhaps the altered leaf litter is affecting insect populations, with ripple effects on food availability for insectivorous birds, suggests Blake, who was not involved in the new research.

If true, the results would force conservationists to rethink some fundamental practices. “In the past, you were thinking, ‘We can just save the rainforest and stop deforestation, and these birds will be alright,’ ” Jirinec says. “But if this is climate-related, it is not just Brazil that has done something [to the forests]. It’s the whole world, and we know how hard that is [to address].”

To Ken Rosenberg, a senior research associate at the Cornell Lab of Ornithology, the new research undercuts a common assumption in conservation research: that “intact” forests have perfectly preserved wildlife populations. It forced him to weigh the potentially unaccounted-for losses researchers might miss when they assume that today’s untouched forests have as much diversity as they did 30 years ago. “Maybe the pristine areas have actually gotten worse, and we’re not tracking that,” he says. Looking forward, researchers should be more careful when using modern “intact” forests as the baseline for conservation efforts, he says.

Not everyone is convinced by the study's conclusion, however. Gonçalo Ferraz at the Universidade Federal do Rio Grande do Sul thinks the recently published paper doesn’t present evidence strong enough to pin the bird population shifts on climate change. Minor environmental differences—if it's pouring rain or the sun has dried the leaf litter; if there are small hills or not on the sites—can alter the perceived abundance of birds, he says, because those microhabitats direct the animals’ behavior. In his view, the statistical model used in the paper doesn’t fully capture those variations, leaving him unsure how widespread the trend Stouffer’s team observed actually is.

“I’m not ready to argue that the trend is completely nonexistent,” he says. “I just think that it is so important that we must be careful.”

Spread the love WASHINGTON ­— Congress has reached an agreement to fund the federal government, but has missed an important...

The 118th CBC in New Mexico

Spread the loveExactly what a CBC season!&nbsp Unlike this past year&rsquos wintry blasts which caused counts to become delayed or...

Spread the love A new study published in Conservation Biology has found that stewardship and management is essential to helping...