But the happy pair have formed an unlikely friendship — thanks to their shared sense of fun. 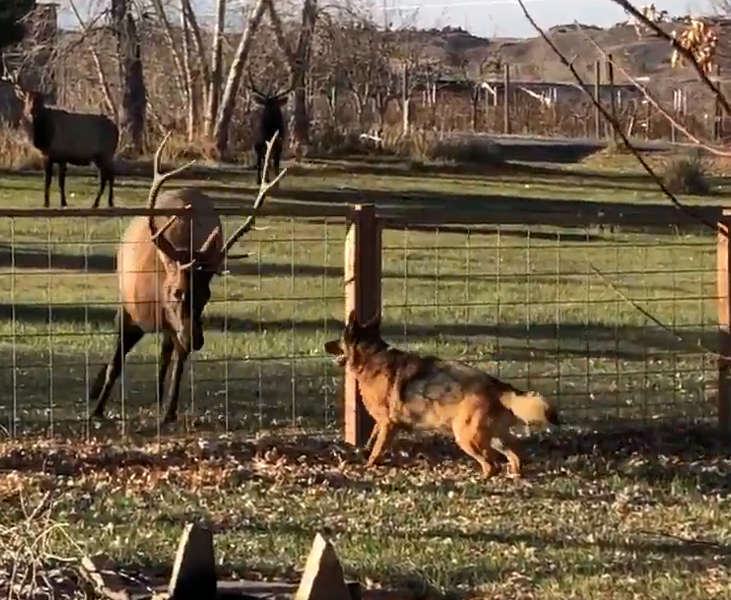 For the past few years around this time, a herd of elk have been visiting the property of one Colorado Parks and Wildlife officer and his pup, Trygge. While their presence is always a sight to behold, Trygge does more than just watch.

From the beginning, the friendly dog managed to strike up a surprising friendship with the herd’s leader — a large bull elk. And before long, they invented a game all their own.Here they are on video, during the elk’s most recent visit:

WATCH amazing video of a bull elk and German shepherd chasing each other playfully along a fence. They seem to know everyone needs to get out and enjoy the Colorado outdoors. This elk and dog have been playing for years, as witnessed by an @COParksWildlife officer. #wildlife pic.twitter.com/nVGcGhDqg6

— CPW SE Region (@CPW_SE) December 10, 2019 While the herd looks on, their leader and Trygge engage in what’s basically a game of tag — chasing each other back and forth along the fence line.

The rules to the game are unwritten, of course, but the dog and elk respect each other enough that the interaction is safe and fun for both.

“They never seem to get aggressive with each other,” Bill Vogrin, spokesperson for Colorado Parks and Wildlife, told The Dodo. “In fact, the bull could easily jump into the yard if it decided to. But they keep their distance across the fence line.”

And with any luck, this unlikely friendship will go on for many years to come.