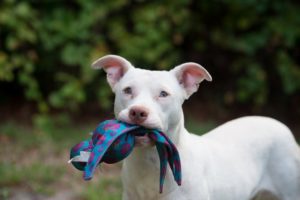 Ghost, one of the world’s cutest pups, was told he was ‘unadoptable’ because he is deaf. Instead of finding his forever home, he sat in a Florida shelter, where he’d been dumped. That is, until Swamp Haven – an animal rescue organization based in Florida – heard about him.

With their assistance, Ghost was finally able to move into his temporary new home with other “down-on-their-luck” pups. Soon after, Swamp Haven called the Olympic Peninsula Humane Society in Washington to see if they had a place for the charismatic pup. Their answer would change Ghost’s life forever in the best possible way.

Falling in Love With Ghost 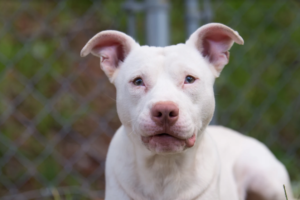 Ghost and his handler use special signals during training. (Photo by Swamp Haven)

Lucky for Ghost, the Olympic Peninsula Humane Society was starting a training program for deaf pups. Of course, as transport from Florida takes approximately 12 weeks to organize, Ghost was able to spend more time with his family at Swamp Haven before starting his new life.

Lindsay Kelley, Swamp Haven’s founder, admits that they had some growing pains when learning how to communicate with Ghost. He was the first deaf pup they’d ever worked with. Still, none of that stopped everyone from falling in love with the adorable white Pitbull mix.

In fact, they had 48 drivers volunteer to help transport Ghost from Florida to Washington.

“By the end of the week-long trip, everyone had a Gator [Ghost] story,” Kelley told MNN.

These included “war stories of car seats being torn apart or leashes chewed through or a tennis ball he [Ghost] popped in less than a minute.”

Special Training for a Special Pup 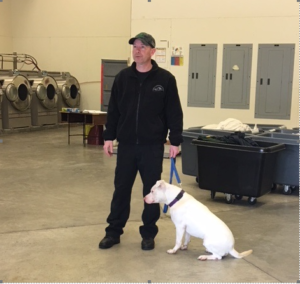 Ghost and his trainer/handler, Joe Henderson. (Photo by Washington State Department of Social and Health Services)

Ghost’s love for tennis balls turned out to be a very good thing for the young pup. When the staff at the Olympic Peninsula Humane Society saw how much he loves chasing and finding the hidden balls, they had a bright idea.

Barbara Davenport is their go-to trainer for high-energy pups. She’s helped shelters, rescues, and humane societies in Washington train 450 rescue pups since the 1980s. When she met Ghost, Davenport instantly knew he would be perfect as a drug detection K-9 for the Department of Corrections.

High-energy pups like Ghost need a good outlet. Davenport told King 5 News that his being deaf “seems to make him even more focused.”

“Because [Ghost] is deaf, owners would need to learn new skills to communicate with him,” Davenport said to MNN.

Introducing Ghost to the Department of Corrections would be no different. Thus, she asked Joe Henderson to help her develop a special hand signals system to aid the pup in his future endeavors as a K-9 for the DoC.

A Pup with a Bright Future

Ghost finished his training with Davenport and Henderson – officially becoming Washington’s first deaf K-9. Even better news: Ghost loves his work! All the energy the pup put into finding his hidden tennis balls is now used to find drugs in prisons. Henderson and Ghost have also done additional work together in other state facilities.

Plus, on his days off, Ghost gets to spend his time chasing after his beloved tennis balls.

“It was definitely a team effort to save Gator/Ghost,” Kelley says. “We’re so happy to be a small part of his journey.”

Kelley also hopes that Ghost’s story gets shared as much as possible. Not only can the pup help to inspire dog-lovers to adopt, “but also to shine a spotlight on dogs that society usually categorizes as ‘unadoptable’.”

Ghost finally found his happily ever after. Do you want to help other pups in shelters who are waiting for their very own happy ending? Shop iHeartDogs and we’ll make a donation through one of our give-back programs!