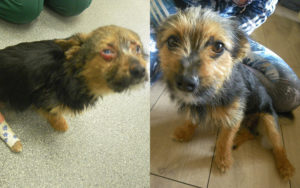 It seems human cruelty knows no bounds. Never, in the worst of our nightmares could we ever concieve of the horrific abuse that this poor, precious pup suffered. Please be warned: the pain suffered by this sweet animal was extreme, but also know that he’s in good hands now.

Chunky, a Chihuahua mix, was the happy pet of a loving family in the UK. He is adored by his people, but for no reason at all, was targeted at random for a sick way to pass time. Chunky was stolen from his family by four teenagers who tortured him for hours. While away from his family, Chunky was fed drugs, beaten, and then had his face set on fire with an aerosol can. When they thought he was dead, the tossed him in a dump and left.

The words come across so quickly, but the time it took to harm Chunky this way must have felt like an eternity. Drugged. Beaten. Burned.

Miraculously, Chunky survived. His incredible spirit persisted, and he lived. The next evening, Chunky was found still breathing, and despite his broken state, wandering along a road. But he was in terrible shape. Aside from the burns, Chunky also suffered from a broken neck and leg. He was taken in for care by his rescuers and shortly after, reunited with his family.

Chunky getting some much needed love.

The teens responsible for hurting Chunky were found and had to stand trial for their crimes. They each plead guilty to having caused this poor pup unnecessary suffering. They were all fined, but only one was banned from keeping pets, and only for five years. RSPCA inspector Caroline Doe told Metro UK:

“This was the most disturbing case I have ever dealt with – by an absolute mile. The whole thing sends shivers down my spine. The defendants may have been young and confessed to being under the influence of drugs but the cruelty they inflicted on this poor dog was extreme, barbaric and inexcusable.”

They tried to destroy Chunky, but he proved to be stronger than the abuse he suffered. He has healed wonderfully, and is safe at home with his family.

There is NEVER any excuse for abusing an animal. Find out what to do if you witness animal abuse here: 5 Important Steps To Take When You Witness Animal Cruelty.