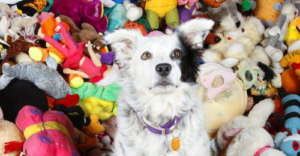 An article on Krem.com stated that your dog may not remember the hug you just gave him, due to some research done by Stockhom Univeristy and Brooklyn College.

According to the article:

“[the study found] that for dogs, events are forgotten after about two minutes—and that’s on the long end of the spectrum. The average memory duration for all animals studied is 27 seconds, with chimps’ memory as short as 20 seconds; that’s a length of time that rats beat, reports National Geographic.”

Dr. John Pilley is an emeritus professor of psychology at Wofford College in Spartanburg, South Carolina. He has published several studies in the Journal Behavioural Processes based on his work with his dog Chaser. Chaser is considered the World’s Smartest Dog— knowing over 1,000 words and remembering the names of over 200 toys.

We interviewed him about the above study because who better to talk about dog’s memory than the owner and trainer of Chaser? Image source: Chaser the Border Collie
What do you think about this study? Do you agree with the findings?

JP: I viewed the abstract of the study, but I would need to read the research more closely to accurately evaluate the nature of the design of the study.  It is true that negative findings do not get published often because of the possible inadequacy of the design; which could be the reason positive findings were not found.  One needs to be very careful before one says something is not possible.

The observation of many animals, when challenged to hold information in their brains is quite astounding.  If one locks into something that is interesting to the animal, it would seem more likely to demonstrate the maintenance of memory.  It also depends upon how complex the situation is that is being used.

In science there’s always the possibility of making an error.  There are 2 ways.

It’s more advantageous to assume that dogs and animals have short-term memory because in believing that they do, researchers are more inclined to test their memory.   Also, as a scientist you dare not cheat, because others will replicate your findings and if they cannot replicate your work, your findings were not accurate.

Do you think Chaser has a “bad” short-term memory?

JP: I would say she has an excellent short-term memory.  With Chaser, if there is an object that is food or a ball as opposed to a sock, the food or ball is much more likely to stay in her memory.  It has to do with the value of the memory.

I haven’t done a rigid experiment, but I was intrigued, so I did a mini-trial with Chaser. I put 2 toys on the living room floor, a Frisbee and a little snowman named “Frosty”.  I took Chaser into the bedroom and asked her to find Frisbee.  I then waited with her for 2 minutes, after which I gave her the command “ok!” She took off like a bullet and immediately brought me the Frisbee.  She was successful most likely because she loves her Frisbee.

Chaser and her toys. Image source: Chaser the Border Collie
How long does it take her to remember a new toy name, for example?

JP: Just one trial, it’s immediate.  To keep it in her long term memory, she needs rehearsal, as we all do.  To learn a new instrument, or language or any multitude of tasks, we all need to rehearse and focus.

Do you think different breeds may have different short-term memories?

JP: I would think that each breed would have stimuli that are more important to them to allow for short term memory.

The study also mentions dolphins being able to recall a whistle twenty years later. What do you think about dog’s long-term memory?  Do you think it’s that good?

What does any of this mean for the average dog owner when they are training their dog?

JP: It points back to value.  Pay attention to what instinctively interests and motivates your dog.

Most dogs don’t seem to have an issue remember where they set that bone down two minutes ago, because it’s important to them. Image source: @BowlTheBoxer via Flickr
VALUE

Dr. Pilley added a final note to all this:

As a final note, how many of us are introduced to someone new and within seconds we have forgotten their name?  How many times have we gone into a room to retrieve an object only to become distracted and forget what we were looking for?  If the task is of importance, we will be more likely to remember. I believe the same applies to animals. There must be value to the memory.

So what about that hug? Well, if it’s meaningful to your dog, he will remember it.