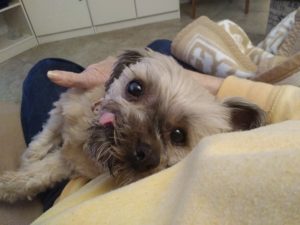 Michele, who often goes by “Mickey,” has an affinity for Shih Tzus that began ten years ago. When her husband was diagnosed with cancer they decided to add a dog to their family. They’d had dogs before, but the couple became older, their criteria for furry family members became more practical to fit their calmer lifestyle. Mickey tells iHeartDogs,

The search for a calm, low-shed dog led to a genuine love of the little breed. They introduced a sweet, 4-year old ball of curly white fur into their home and named her Cocoa. “She was named by my late husband who happened to be a chocoholic.  The name Hershey or Nestle didn’t work for me.  So, we compromised with Cocoa.”

About two years after adopting Cocoa, Mickey’s husband passed away. Cocoa was able to support Mickey through the heartache. Mickey later found that Cocoa was able to bring joy to others, too. As a certified therapy dog team, Mickey and Cocoa would roam the Banner Thunderbird hospital, brightening the day of dog-loving patients.

As Cocoa got older and slowed down, it became too difficult for her to walk around the hospital, and for her sake, they switched to visiting hospice patients. But eventually Mickey and Cocoa had to give up therapy work. The two lived a quiet life together until last September, when Cocoa passed away at the age of 14. Without her dog around to comfort her, Mickey had to suffer the heartbreak alone.

“Losing her felt like I was losing him all over again. I thought that I would not want another dog again. But the months went by and my house and my heart felt very empty.”

Mickey was hesitant to get another dog, but when she spotted a unique face online, everything changed. 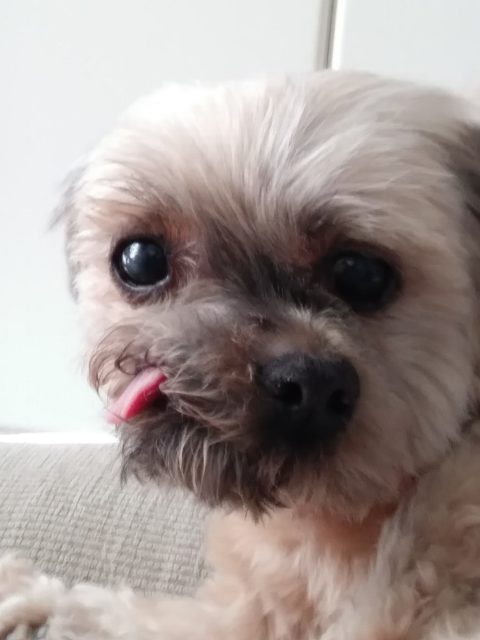 Minnie – then Bernice – was found as a stray by Maricopa County Animal Control. After a mandatory three-day stray hold, no owner came forward to claim her. As a senior in a high-risk shelter with an unusual face, her chances weren’t great, but she was pulled by Ruby Ranch Rescue. Ruby Ranch takes in senior dogs in dangerous shelters and gives them all the time they need to find a family. Minnie spent a week or so with the Rescue’s director before moving on to a foster. Her photo was posted online where she didn’t garner much attention, but caught Mickey’s eye and didn’t let go.

“I discovered Minnie on a website. She had a very different look about her that I found endearing. I realized that every morning I would go back to that website to look at her again. After several days I contacted Ruby Ranch Rescue, so that I could arrange to meet her. 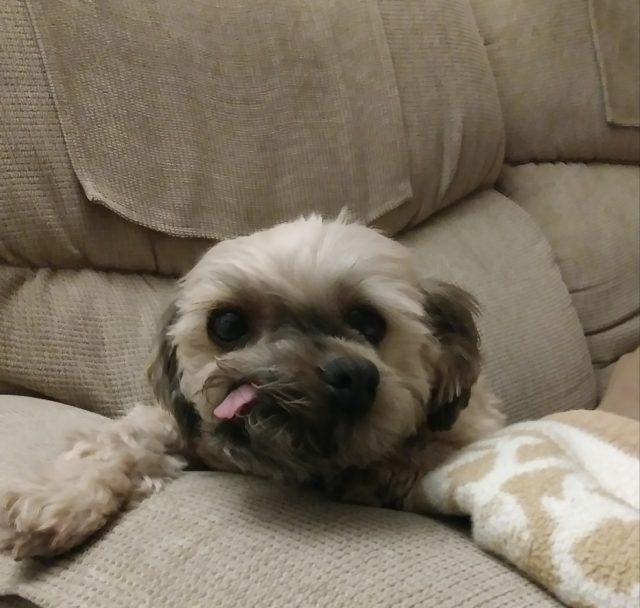 “Her little nose is under her left eye. Her top jaw is extremely off center so that her teeth don’t mesh. They were not sure if it had been from an injury or a birth defect.”

“When I met her she was even cuter in person than she was in her picture. Her foster mom brought her over for me to meet. When my daughter got on the floor with her and a squeaky toy Miss Minnie became so animated and playful that her foster mom was shocked.  She said she had never seen her like that before. I knew at that moment I could not send her away.”

Mickey opened her heart to the little senior pup, and gave her a new name!

“I changed it to Minnie because I go by Mickey and I thought we would make a cute pair. It was serendipitous. 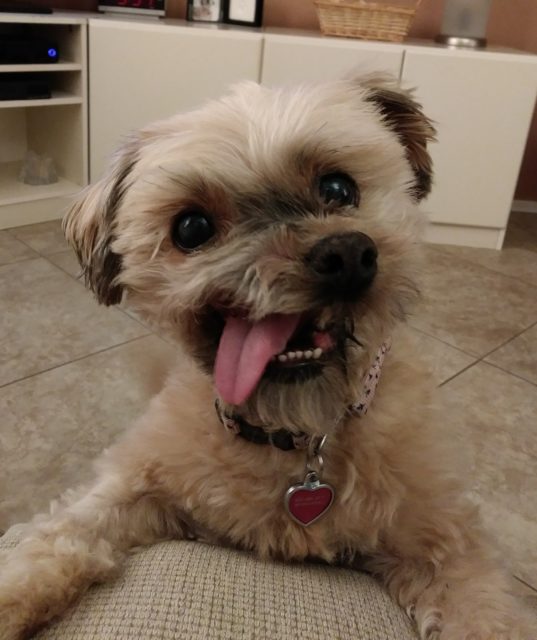 “Minnie truly isn’t special needs. The only thing that is different about her care is that she will require more dental work through her life. She has already lost quite a few teeth. Because her jaws do not mesh, and she is not able to get saliva to all of her teeth, many decayed and had to be removed. She is not able to eat large pieces of kibble or take a small treat from between my thumb and forefinger. I just put it in an open palm. Other than that, she eats, drinks and snores with no problem.”

Minnie’s off-center snout causes few issues and gives her an absolutely precious smile! She easily won her mom over, but some people seem confused that Mickey would choose a dog with a “different” face. It’s a response that Mickey doesn’t understand when she looks at Minnie.

“A couple of people asked why I had adopted such a strange looking animal. I am afraid I am not very good at maintaining a poker face. I am certain that I looked like a deer in the headlights.

“They quickly back peddled and would attempt to tell me how ‘cute’ she was. I would just explain that she needed me more than the ‘pretty’ one did.” 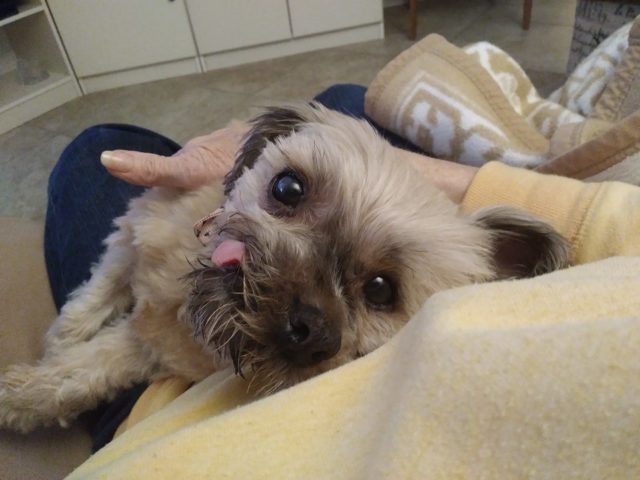 We think Minnie is very pretty!

“The very first night I had her, I was awakened at 3:00 am by the sound of a coyote in my bedroom. Only to discover this poor little dog sitting on the floor shaking and howling. It took me over 10 minutes to get her to calm down and when she did she whimpered for another 10 minutes. I held her close and my heart just ached for her. She was so frightened.

“As time has gone on, the night terrors have decreased. We had gone for a month with no incidents. And then it happened again the other night. The good news is that she settled in under a minute.”

Minnie is settling happily into her new life and has helped mend the broken heart that took her in. Mickey hopes that in the near future, she and Minnie will be able to spread happiness to those who need it like she and Cocoa once did, by becoming a certified therapy dog team! 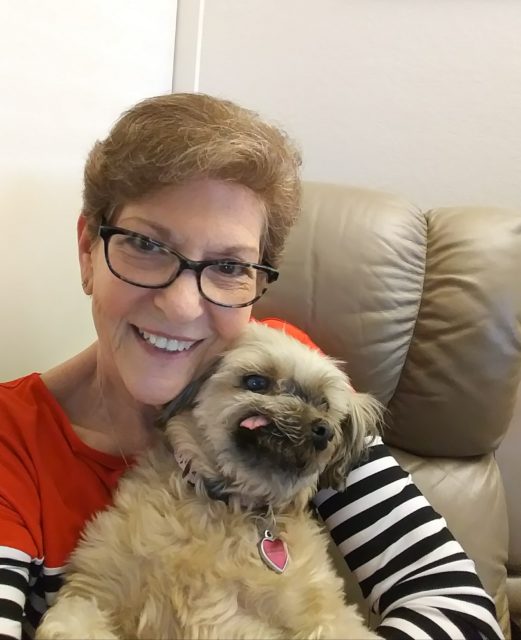 “What a wonderful experience that was for us. I have been working with Minnie so that we can do the same.  After we have been together for six months I will have her evaluated. That is something that I am super looking forward to doing with her. I just know that she will be so good at it. It is so very rewarding.”

“I had not one moment of hesitation with the decision to adopt Minnie. And not one moment of regret since. I have seen how she has grown in the three months that we have been together. I work with her in training and learning new things. She is infinitely more cuddly as time has passed. She has become so much more playful.”