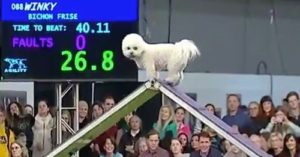 The Agility Competition at the Westminster and Crufts dog shows are a source of pure entertainment for dog lovers. It’s exciting to watch the incredible canine athletes, but the real fun is the unpredictability of the dogs themselves.

Take for example, Mia the Beagle. During her 2017 Westminster run, Mia was more interested in the crowd and the state of her lady parts than the competition.

And then there was Kratu’s 2019 Crufts performance. The shaggy Romanian rescue dog created his own path through the obstacle course, occasionally sprinting over to the sidelines to visit onlookers. 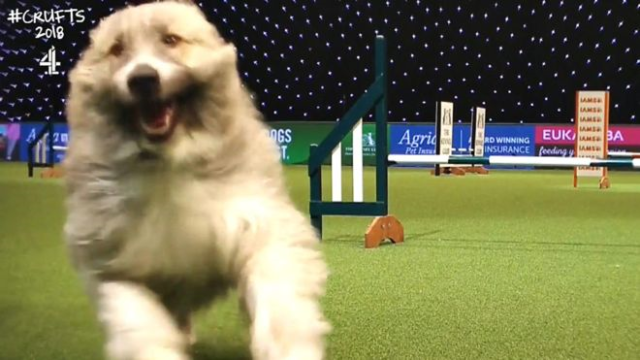 This year, a jaunty little Bichon Frise named Winky stole the Westminster show. His performance was excellent. He hit every obstacle just as he should. However, he did so at a glacial pace!

It seems sweet Winky forgot that speed is a big part of winning an agility competition! Maybe he mistook the course for the show ring? Watch as he prances through the course like he’s out for an afternoon walk!

Perhaps Winky and company aren’t used to such large crowds when they compete. Maybe they find the announcers distracting.

Whatever the reason for Winky’s leisurely performance, he certainly seemed to have a good time. Better still, the crowd adored him!

In contrast to the show portion of the competition, agility is all about fun. Every dog that qualifies to compete at Westminster or Crufts is already a champion, and the seasoned handlers understand they occasionally have “off” days.

I don’t know about you, but I enjoyed Winky’s performance just as much (if not more) than Verb the Border Collie’s winning run! It’s a great reminder that it’s not whether you win or lose, what matters is that you have a good time!

The post Prancing Pup Runs The Westminster Agility Course At His Own Leisurely Pace appeared first on iHeartDogs.com.