The day was playing out like any other day for Mission Texas resident, Melissa Janelle Torrez. It was a Friday afternoon and Torrez was getting ready to leave home. However, just as she was driving out of the neighborhood, Torrez was met with a very disturbing sight.

Mario Cardona, her 59-year-old neighbor, was cruising nonchalantly down the road on his motorized scooter. Dragging behind the scooter was Cardona’s 10-month-old German Sheperd puppy, G2. With her blood running cold, she quickly whipped out her phone and started recording the horrific incident.

“I was really upset,” she admitted. “A lot of people told me I should’ve cut the dog’s leash, I should’ve taken the dog, push [Cardona] off his wheelchair…and I wanted to do all those things, but I had to think with my mind and not my emotions.”

G2 most certainly endured a traumatic event, but with the pup’s future in mind, what Torrez did was necessary. Had she taken immediate action instead of videotaping, G2 might still be with Cardona. Plus, you can 100% hear the emotion in Torrez’s voice.

Cardona is a bold and sick man.

Rather than being deterred during the shooting of the video, he told Torrez, “Call them [police], it’s my dog!” 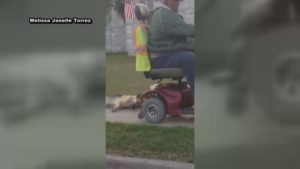 Fortunately, that wasn’t the end of the story. Not only did Torrez hand over the disturbing footage to the Mission Police Department, but she also uploaded the video to Facebook. In the end, even the police department supported Torrez’s quick decision to pull out her phone and hit record.

“You know, something like this is great, because somebody actually provided us with video evidence,” Lt. Jody Tittle of the Mission Police Department told WANE-TV. “Sometimes, animal cruelty is hard to prove, you know, as bad as that may sound.”

Within 15 hours, Cardona was arrested and charged with animal cruelty. 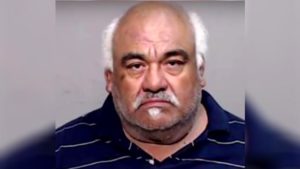 And as it turns out, this wasn’t his first offense.

Cardona has a rather lengthy criminal record, including charges ranging from assault and DUI to criminal mischief and possession of cocaine. However, even with justice on their side, authorities still ran into a brick wall of sorts during court.

You see, G2 apparently “belonged” to Rosa Maria Cardona, the defendant’s wife. During the court proceedings, the Municipal Court Judge, Horacio Pena Jr., ruled that G2 would not be returned to her former “home”. 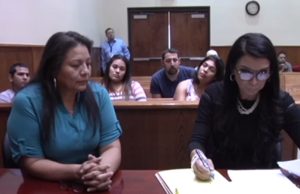 Despite the judge’s immediate ruling, Maria Cardona still insisted that her husband was depressed and suffering from PTSD. She was adamant that he was not in the right state of mind, and since G2 was “technically” her dog, she should be returned to her.

A Brighter Future for G2 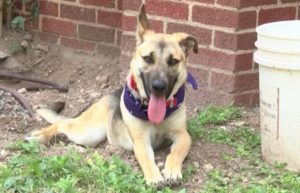 The judge rightfully stuck to his first ruling. And although Cardona was released from jail due to his medical conditions, he did have to return to court and pay a $10,000 bond.

As for G2 – the pup’s traumatic childhood was over.

Although her journey will still involve a lot of healing, G2 was finally able to start moving forward when Father Roy Snipes of the Our Lady of Guadalupe Church welcomed her into his family. Renamed “Ceniza” by Father Snipes meaning “Ash” in Spanish – this pup has truly risen from the ashes like the mighty Phoenix. It’s safe to say she’s finally found her one true forever home. But the story doesn’t end there.

In a surprise twist of events, it turned out that Father Snipes was also Cardona’s priest. In an interview, he claimed that Cardona “wasn’t aware” G2 had fallen over, and that he was being typically sarcastic in the video.

While members of the church may have forgiven Cardona, the rest of the community remained understandably outraged. But, just like anger can be turned into forgiveness, it can also be turned into something greater.

Moved by Torrez’s actions to save G2 from abuse, Mission officials founded Pawsible. The group regularly works toward rescuing abused pups and teaching children how to take proper care of their furry friends. 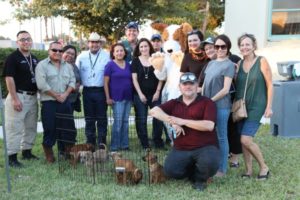 The post Man Who Dragged Dog Behind Scooter Put Behind Bars Thanks to Quick-Thinking Dog Lover appeared first on iHeartDogs.com.