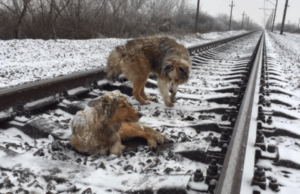 Ukraine’s winters are harsh, especially if you’re a lost dog. Worse than being lost, though, is being injured. When two dogs named Lucy and Panda got loose from their home in Uhzgorod, Ukraine, the odds were already stacked against them. Lucy was injured and unable to walk, so she was stuck lying on train tracks in the snow. Not only was it below-freezing, she was trapped on an active track with trains coming and going.

Despite the danger, Panda refused to leave her side. Rescuers were taken aback by the emotional connection between the two pups.

Panda even helped tuck Lucy’s head away in the middle of the tracks when trains came through, miraculously avoiding further injury. One of the rescuers that responded to the scene was Denis Malafeyev. He took video and wrote on Facebook that the:

“[…] male dog heard the sound of the approaching train, came close to the female dog and laid down next to her… Both of them pushed their heads towards the ground, and let the train pass.”

Thankfully Panda and Lucy were safely removed from the train tracks and harsh winter weather. Their owners were located and are overjoyed to know that the dogs are safe and relatively unharmed.

Both dogs received veterinary care and are now safely back home with their family.

The post Dog Stays On Snowy Train Tracks To Care For Injured Friend Until Help Arrives appeared first on iHeartDogs.com.