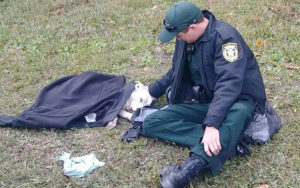 Florida resident Carlos Irizzary was walking his dog when he spotted an Osceola County Sheriff’s Deputy sitting on the ground next to an injured pup. The dog was struck by a car and left by the roadside when Deputy Josh Fiorelli found her. She was scraped up, had a dislocated leg, and couldn’t move much. Even in Florida the weather becomes cold in December, so Deputy Fiorelli draped his jacket over the wet dog to make her a bit more comfortable.

Deputy Fiorelli didn’t know anyone had seen him when the photo was taken. He didn’t do it for the likes, or the praise. He only wanted to show a little kindness to a frightened dog.

“It was cold out. She was wet. She didn’t have anyone there so I decided to be that person,” he tells WFTV9. “I know a lot of dogs become defensive when they get hurt. She was not defensive at all. She was acceptive of me trying to pet her and take care of her.”

The photo has since gone viral, and lots of praise has been heaped upon the Deputy, even if he wasn’t asking for it! He’s even been offered a few dates from some eagle-eyed fans who spotted his ringless finger in the picture! They must be the type who appreciate a man in uniform who is sweet to dogs!

The pup was taken into the care of Osceola County Animal Services. They noticed that though she was in pain, she would still wag her tail.

The photo has since been seen by millions of people who thank Deputy Fiorelli for his nice gesture. It’s a sweet reminder that though it may not be a big deal for you, a small kindness can make a world of difference to a dog.