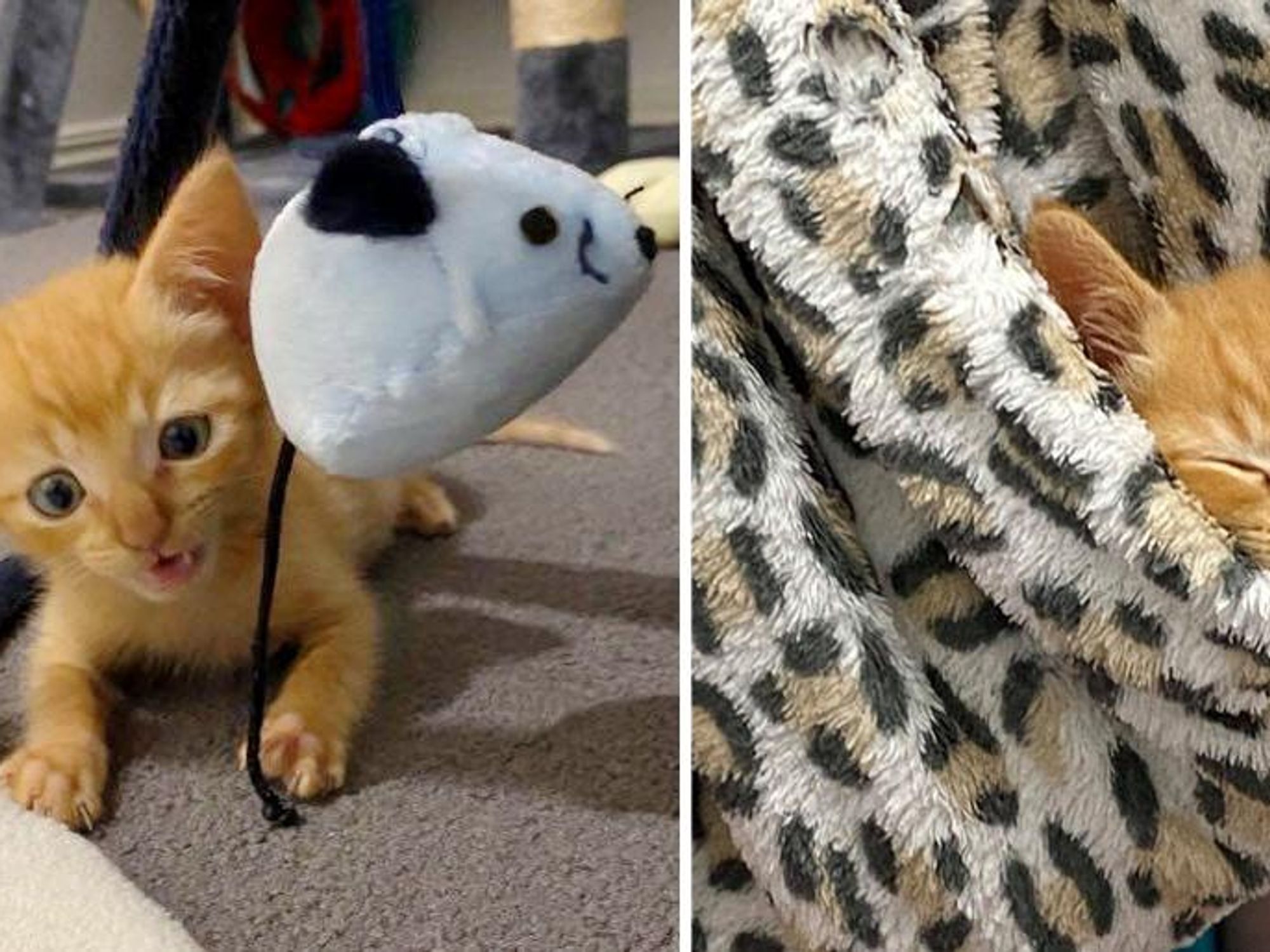 A kitten with big ears and a tiny body really transformed after being rescued from life as a stray.

A Good Samaritan discovered a little puff of orange running on the streets before disappearing in some rocks near a creek. When they realized it was a kitten and that they needed assistance to get him out safely, they went on social media to seek help.

A volunteer of Best Friends Felines, who is also a vet nurse, immediately went to the scene and was able to coax the kitten out before it was too late. The orange tabby was just skin and bones and covered in fleas. His growth had been stunted due to severe malnutrition.

“He weighed in at a tiny 225 grams at about six weeks of age. After searching around that night and later the next day, she found no siblings,” Best Friends Felines shared with Love Meow. “The little man was alone, scared and starving.”

Being less than half the size for his age, the tabby’s ears were disproportionally larger than his body. He was lovingly named Mufasa, and the little guy had a lot of growing and catching up to do.

The vet nurse took him home to foster so the kitten could receive the care he needed to thrive. She brought him to work every day to keep up with the round-the-clock feedings.

Mufasa insisted on being close to his foster mom and never wanted to be alone again.

The tabby boy quickly came out of his shell and began to crave affection when he realized that he was safe. He turned into a full-time snuggle-bug and thoroughly enjoyed being held and cradled like a baby.

His preferred napping place was in the comfort of a pouch or kitten sling while he stayed snugged with his human.

During the time he was at work with his foster mom, he didn’t hesitate to offer a helping paw at the front desk, keeping things in order while melting many hearts.

With proper care and dedication from his carer, the little guy’s weight continued to climb. Though he still had a long way to go, he was determined to grow big and strong.

When he was ready to socialize, he was introduced to two feline sisters, Nala and Kiara, who quickly took him in as their own. “All three are playing together and snuggle up as a trio for nap time,” Best Friends Felines shared.

“Nala and Kiara are actually a fraction younger than Mufasa, but they are much bigger than he is, due to his rough start in life.”

With his constant companions and all the cuddles he can get, the tabby is thriving and starting to grow into his big ears. He’s at 590 grams and has almost tripled the weight and nearly caught up in size for his age.

“Our gorgeous little man is now looking like a kitten rather than an adorable little alien as he gains the much-needed weight, no longer showing his spine and ribs prominently.” Best Friends Felines wrote.

Nala and Kiara encourage him to play and do all sorts of fun kitten things. Their energy rubs off on him, and he’s getting more playful and mischievous. They scamper around the room, explore every nook and cranny while they plot antics as a trio.

“He loves to play and adores his snuggles. He gets on great with his younger foster siblings who are still bigger than him.”

“(With) all going well, Mufasa will hit target weight for his first vaccination this coming week and will be able to go up for pre-adoption soon thereafter.”

This pint-sized wonder has come a long way. He may be tiny but has a tremendous personality, the heart of a lion, and so much to give.

Mufasa is blossoming into a handsome, healthy young fella. He is loving his VIP life as a spoiled indoor cat.

“We are so proud of this little man and how far he has come with the dedication of his foster mom.”

Related story: Kitten Half the Size He Should Be, is Determined to Live Full Life After Being Found without Mom