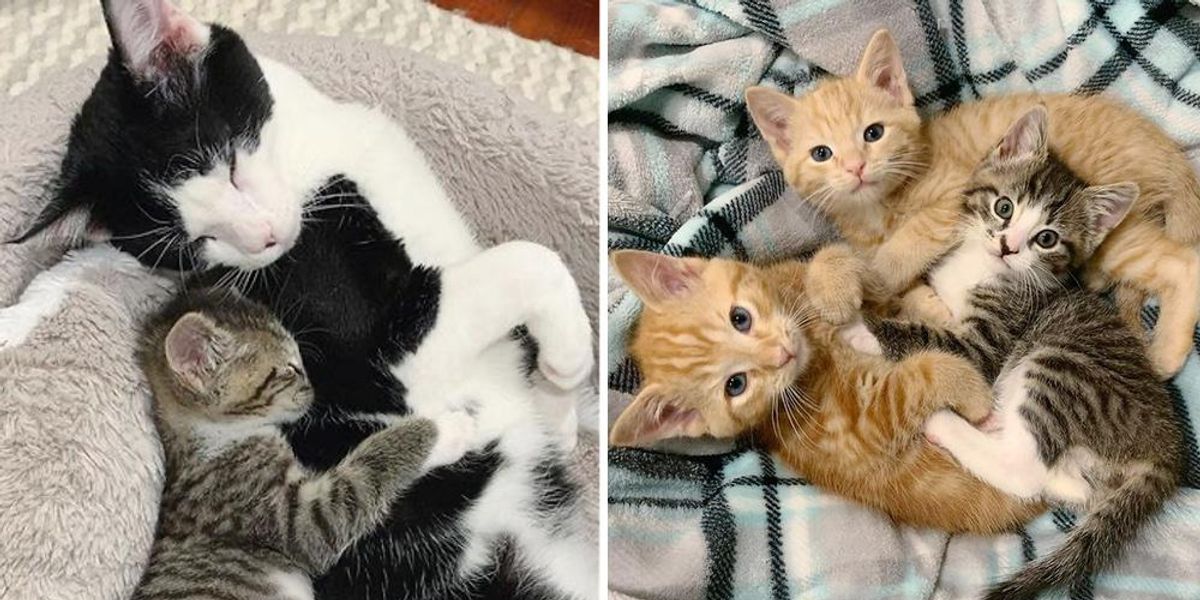 A kitten has come a long way and made great strides with the help of a cat and two ginger kittens.

An orphan kitten was brought to the Animal Welfare League of Arlington (AWLA) for a chance at a better life. It didn’t take long for volunteers to notice his need for a feline friend.

“This precious little 5-week-old was in the best of foster homes but as he is a singleton, he really needed a buddy,” Lauren, a foster volunteer of AWLA’s Kitten College Program, shared.

At the time, the best candidate was Kolbe, Lauren’s former foster and now proud resident cat. Kolbe has gone through the journey himself, and even helped other kittens in need along the way.

As a singleton, Lloyd the tabby came with a bit of a wild side and had a lot of socialization to do. “He’s so sweet and incredibly friendly but he also likes to bite and nip a lot when he’s feeling playful or affectionate,” Lauren wrote on Instagram.

Lloyd showed telltale signs of Single Kitten Syndrome, in which the kitten tends to play very roughly along with other behavioral issues. The best help often comes from socialization with other cats or kittens. “Lloyd is a little guy but he has some big opinions about what he wants and especially when he wants it.”

The fierce kitten was not shy about showing his sassy attitude, especially when he was hungry or being possessive over what he deemed as “precious”. He’d whip his tail back and forth and screech with all his might.

That’s when Kolbe came to play, as a mentor, to teach him about boundaries and to calm his bites.

“Kittens naturally learn boundaries and appropriate behaviors from each other through play and simply growing up together. As a singleton and an orphan and now a boy with an emerging strong personality, Lloyd is a bit of a wild child,” Lauren wrote.

The little tabby started to imitate Kolbe and tag along with him everywhere he went.

Lloyd, being so young, was very receptive to learn. He looked up to Kolbe and followed his lead, romping around with his new best friend.

While Kolbe showed him the ropes around the house, Lauren applied swaddling techniques to soothe the kitten in a purrito. “It is very effective in socializing and calming young kittens.”

Lloyd began to relax and enjoy the process of cuddling with his humans. Around that time, a pair of ginger kittens, Checkers and Stripes, who are close in age to Lloyd, made their debut at Lauren’s home.

“These handsome fellows were being raised by another foster, but she generously let them come be friends with Lloyd to help tame a bit of his wildness,” Lauren said. “It truly takes a village to raise healthy and well-adjusted kittens.”

Once Checkers and Stripes were ready for a proper meet-and-greet, Kolbe took them under his wing and accepted them as his own. But it was Lloyd who couldn’t contain his excitement. “He was over the moon when he met his new lion cub friends.”

Instead of cuddling with his favorite lion toy, now Lloyd will snuggle up to his ginger buddies and purr himself to sleep.

“Thanks to all his big brothers, the difference in Lloyd’s behavior is like night and day,” Lauren shared.

Kolbe insists on giving the little mischief-maker mandatory baths every day, as if it’s part of his love language. “They have such a big brother, little brother relationship. They bicker and wrestle and love all over each other.”

Since the arrival of the ginger kittens, Lloyd has made incredible strides.

“Although his personality will likely always be on the wilder side (and we wouldn’t have him any other way!), Lloyd is noticeably happier and more content and his singleton behaviors have all but disappeared.”

“There is a misconception that cats are solitary creatures. But all the research from cat behavioral experts suggest – and Lloyd’s own story proves – that kittens lead healthier lives in the long run and make better pets overall when they have friends,” Lauren added.

Lloyd has blossomed in just a month. The progress that he’s made, is astonishing.

Related story: Palm-sized Kitten Learns to Sit and Stand Again with Support from Cats Around Him