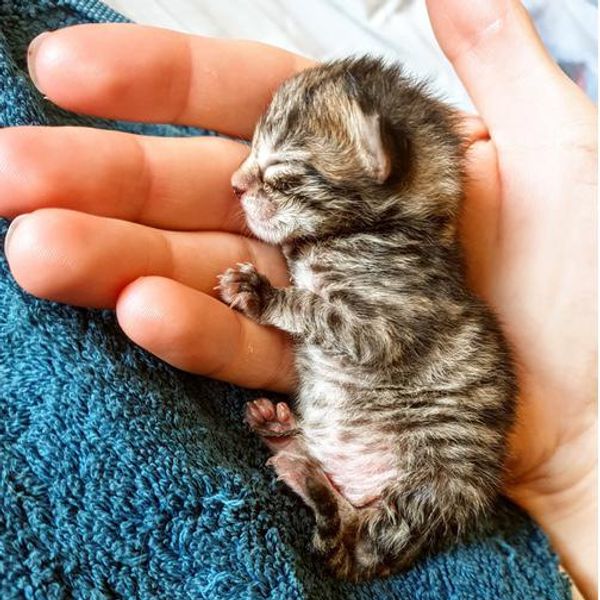 A kitten was nursed back to health from being just pint-sized. She became inseparable friends with a one-eyed cat.

A tiny orphaned kitten was brought to CatRescue 901, a volunteer-run cat rescue, after she was found without a mother. The kitten whom they named Flora, was so tiny that she could fit in the palm of a hand.

At just a couple of days old, without a mother’s milk, Flora had all the odds stacked against her. Katerina, a foster volunteer, began syringe-feeding her every 1-2 hours and used her own body heat to keep the kitten warm and comforted around the clock.

“Flora fought her way through her crashing thanks to an enormous effort from Kat,” Jenny Storaker, co-director of CatRescue 901, shared with Love Meow.

It was touch and go for a while, but her foster mom was determined to nurse her back to health. After many sleepless nights and painstaking care, the kitten started to perk up. She was very tiny for her age weighing just 78 grams.

At one week old, the tabby was still smaller than a typical newborn kitten, but she was on the right track, slowly putting on weight and gaining strength. “She was very active and vocal at feed times and her dehydration had been corrected.”

Kat’s resident cat Sabrina, who is also a rescue, came to give the kitten some much-needed TLC. She would cuddle with the feline baby and bathe her after every feeding.

“It helped Flora’s development and will to live thinking she had a mother.”

At six weeks old, Flora was catching up in size. She still had a lot of growing to do, but the little miracle kitty was out of the woods and getting more playful and curious each day.

With her new-found energy, her personality was shining through.

Flora had completely outgrown her trusty teddy bear that she’d cuddled since day one. She was thriving in foster care and becoming quite the love-bug.

Around that time, CatRescue 901 took in two kittens (Reuben and Finn) that were found wandering the streets in poor shape. Both of them had severe eye infections and had to have one of their eyes removed.


Flora and her teddy bearCatRescue 901

“These guys arrived hissing and very unhappy but with a lot of patience and help, they became little purry wonders,” Jenny shared with Love Meow.

One of the kittens, Finn, quickly found a loving home, and the other one-eyed wonder, Reuben, who was recovering from his eye surgery, was in need of a buddy. They decided to pair him up with Flora and hoped they would accept each other.

Once the two young cats were used to each other’s scent, they quickly hit it off and became close friends.

After Flora was spayed, even the cone-of-shame couldn’t stop her from cuddling with her foster brother and showering him with love.

They were constantly together, grooming each other and snuggling up a storm.

Their friendship continued to blossom in foster care, and when they were ready to find their forever home, the rescue knew that they had to stay together.

After a long journey, Flora and Reuben (now renamed Dylan and Elroy) were officially adopted together.

Their new mom Charlie was completely smitten with the pair, and amazed by how sweet their bond was from the beginning.

Elroy likes to follow his sister everywhere around the house, being her most loyal companion.

When Dylan lounges by the window, watching the day go by, her one-eyed brother comes running and joins right in.

The two kitties have come a long way since they were rescued. Both had a rough start in life but pulled through with the help of their loving foster families.

“It’s lovely to see them all grown up and clearly very happy and well looked after,” Jenny shared.

These adorable feline friends have blossomed into gorgeous cats. They are loving their VIP life and so happy to have each other forever.

Related story: Palm-sized Kitten Learns to Sit and Stand Again with Support from Cats Around Him