The current U.S. Secretary of the Interior is a former fossil-fuel lobbyist with so many conflicts of interest that he’s been known to carry around an index card to keep them all straight. If confirmed by Congress, the next interior secretary will be the former operator of a small canned-salsa business who previously relied on food stamps and, at 60 years old, is still paying off student loans after putting herself through college.

She’ll also be the first Native American ever to run Interior or any Cabinet-level department.

President-elect Joe Biden on Thursday picked U.S. Rep. Deb Haaland, a New Mexico Democrat and an enrolled tribal member of the Laguna Pueblo, to head Interior. The department, now run by David Bernhardt, manages migratory birds, endangered species, and 20 percent of the country’s lands through the National Park Service, Bureau of Land Management, Fish and Wildlife Service, and other agencies.

Importantly, the department also includes agencies like the Bureau of Indian Affairs and the Bureau of Indian Education, and administers government-to-government relationships with 574 federally recognized tribes. Those relationships have been marred by the U.S. government’s broken promises and failure to listen to tribal input, as well as through the dispossession of the nation’s original inhabitants to create national parks under the aegis of Interior, including Yellowstone, Glacier, and Mesa Verde. Native leaders see in Haaland a chance for tribes to have the voice in land management and other decisions that the law provides them but which they’ve too often been denied.

“I’ll be fierce for all of us, our planet, and all of our protected land,” Haaland said in a tweet.

A voice like mine has never been a Cabinet secretary or at the head of the Department of Interior.

Growing up in my mother’s Pueblo household made me fierce. I’ll be fierce for all of us, our planet, and all of our protected land.

I am honored and ready to serve.

Indigenous advocates have lobbied on Haaland’s behalf for weeks and their elation at the decision is clear. “We wholeheartedly support this historic nomination of Rep. Deb Haaland,” said Korina Barry, managing director for the group NDN Action, in a statement. “Representation means progress, and it is important to see people in these roles that look like us, share our lived experience, and who honor Indigenous self-determination. Even more importantly, it is essential that progress also translates into power.”

The journalist and activist Julian Brave NoiseCat, who has been an outspoken supporter and recently changed his Twitter name to #DebforInterior, tweeted, “She's going to make our ancestors so proud. I’m on the floor of my apartment crying with joy.”

After four years of fossil fuel executives and lobbyists opening up Native lands and sacred sites to industry tycoons, the next Secretary of Interior will be a Laguna Pueblo woman who went to Standing Rock in 2016 and cooked for the people.

Bryan Newland, chairman of the Bay Mills Indian Community in Michigan and a former senior policy advisor on Indian affairs for Interior, tweeted, “As a rez-raised DOI alum, I know how vitally important it is to have Native voices heard at DOI,” referring to the Bay Mills reservation and using an acronym for the department. “Secretary Haaland will do incredible things for all Americans in her new role.”

The choice adds to a long and growing list of barrier-breaking picks among Biden’s leadership team, which include the first woman vice president in Kamala Harris; the first openly gay Cabinet secretary in transportation department pick Pete Buttigieg; and the first Black man to run the Environmental Protection Agency in Michael Regan, among several others. It also reflects the major role Indigenous people played in helping Biden win the White House.

Haaland, who proudly calls herself a 35th generation New Mexican, was one of the first two Native American women elected to Congress in 2018, alongside Kansas Democrat Rep. Sharice Davids, and won a second term last month. Tackling climate change and promoting environmental justice have been among her priorities in the House. She was also the first Indigenous woman to lead a state political party as Democratic chair in her home state. She’s a former chair of Laguna Development Corporation Board of Directors and holds a law degree from the University of New Mexico.

The department Haaland is set to helm will play a central role in carrying out much of Biden’s domestic agenda.

The department Haaland is set to helm will play a central role in carrying out much of Biden’s domestic agenda. Nearly a quarter of the country’s carbon emissions come from fossil-fuel production on federal lands, where energy extraction has been a top priority for Bernhardt and the Trump administration. The president-elect has said he’ll end fossil fuel leasing on federal property, an idea that’s politically fraught in Haaland’s home state and others that rely heavily on revenue from energy production. Biden also supports proposals to protect 30 percent of the country’s land and water by 2030, an effort in which Interior would be instrumental. Haaland has been an outspoken advocate for the idea and is the sponsor of a House resolution to make it a national goal.

The department is likely to operate much differently under Haaland’s leadership than that of her predecessors. When President Trump’s first Interior Secretary, Ryan Zinke, flew to Utah in 2017 to tour the new Bears Ears National Monument, he met only briefly with Native leaders who supported the controversial monument, which tribes lobbied for to protect sacred sites, but which Utah lawmakers viewed as a federal overreach. Zinke instead spent the bulk of his time there with opponents. When a tribal liaison asked Zinke why he didn’t meet at greater length with supporters, he told her, “don’t be rude.” Several months after Zinke visited Bears Ears, President Trump dramatically shrank the monument, defying tribes who advocated for its protection. Since Zinke resigned amid allegations of ethics violations and Bernhardt took over, tribes have continued to accuse Interior of brushing aside their concerns, including the Gwich’in people who have resisted planned oil and gas development in the Arctic National Wildlife Refuge, and several Southeast Alaska tribes over the repeal of protections for the Tongass National Forest. 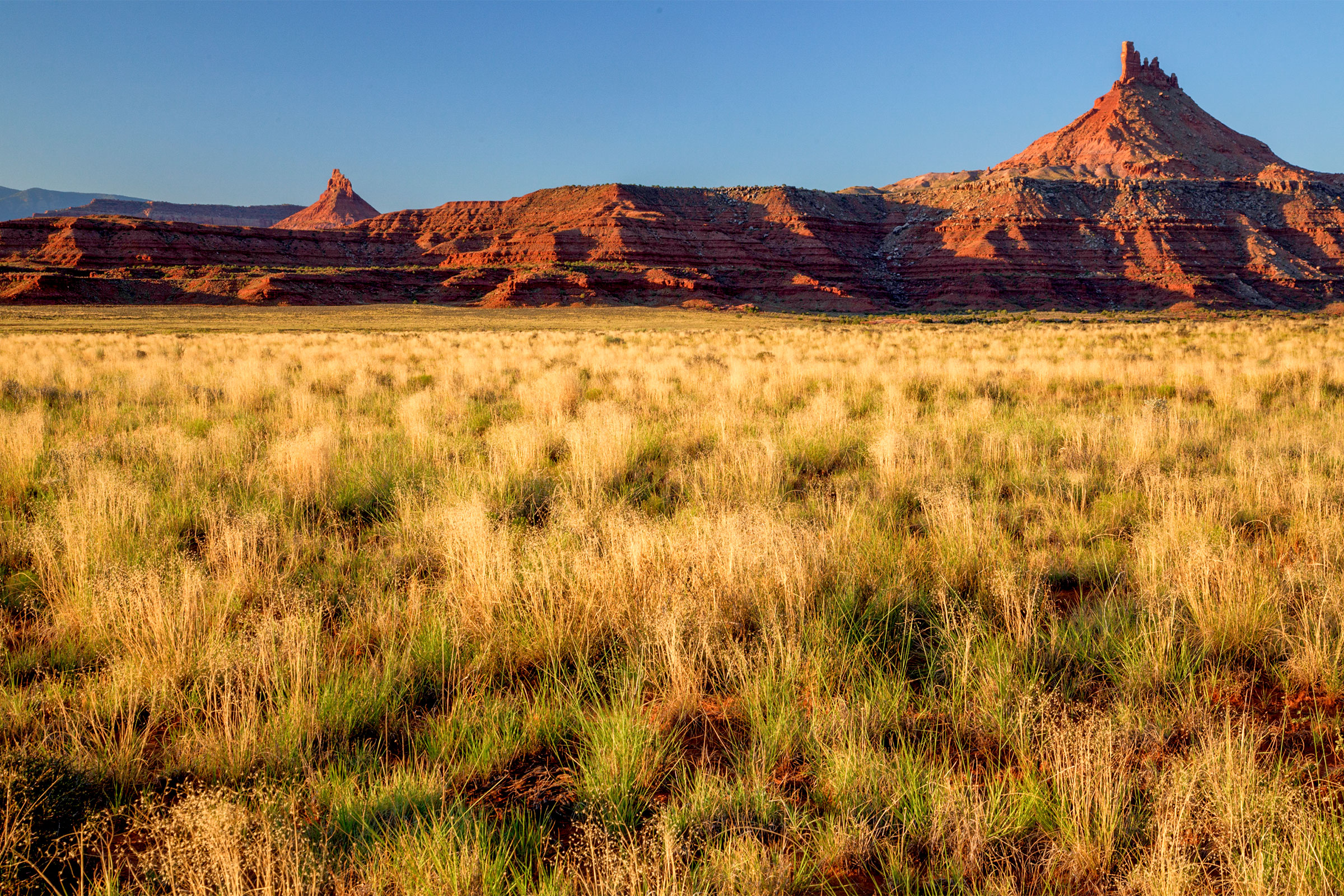 Conservation groups celebrated Haaland’s nomination as a move away from the Trump administration’s industry-friendly environmental policies. “Our nation’s birds, parks, and lands would be in good hands with Rep. Deb Haaland leading the Department of the Interior,” said Audubon President and CEO David Yarnold in a statement. “Our public lands and waters are in urgent need of new vision and investment to help communities and natural spaces build resilience in the face of a changing world.” Haaland is “a supremely qualified nominee for Interior Secretary,” said Jennifer Rokala, executive director of the Center for Western Priorities. “Repairing the damage of the Trump administration is a massive job, and Deb Haaland is more than up to the challenge.”

Members of Congress have also lauded Haaland. Rep. Raúl Grijalva (D-Arizona), chairman of the House Natural Resources Committee—where Haaland is vice chair and leads a subcommittee on parks, forests, and public lands—has lobbied for her nomination and led more than 50 House Democrats in sending a letter to Biden urging him to select her. Even Republican Rep. Don Young of Alaska called her a “consensus builder” who “would pour her passion into the job every single day,” per a Politico piece by NoiseCat. Haaland also received the blessing of House Speaker Nancy Pelosi this week, despite concerns that losing her seat, along with those of two other representatives tapped by the administration, would leave Democrats with a worryingly narrow majority until they’re refilled through special elections. Retiring Sen. Tom Udall (D-NM), whose father ran Interior and who was considered a favorite for the post, congratulated Haaland, whom he called a friend, “on this momentous and well-earned nomination.”

That support is carrying Haaland toward a Senate confirmation that would be a truly historic moment for the country. The mistreatment of Native Americans—often via the Interior Department—has too long a history and has left wounds too deep to be healed by a single person, but Haaland’s nomination marks a turning point.