The sun shines meekly through a veil of morning fog and wildfire smoke while several figures in orange vests, hard hats, and face masks move slowly through a marsh on the north shore of San Francisco Bay. Wielding brooms, they jab lightly at the vegetation, ruffling the tufts of native pickleweed. As biological monitors, their job is to flush out small animals—especially the endangered salt marsh harvest mouse—and usher them from the path of a rumbling excavator, which is about to dig a deep groove in the slick mud.

It’s early October at the mouth of Sonoma Creek, where an unusual conservation project that broke ground five years ago is nearing the finish line. Audubon California and partner agencies are turning what was once a 400-acre stagnant backwater into a thriving wetland ecosystem that will serve as a refuge from rising seas for decades to come.

This revitalization of Sonoma Creek marsh is more a story of creation than one of restoration. The place is a product of the Gold Rush era, when torrents of unearthed sediment choked the Sacramento River system and later settled downstream. While hawks, grebes, and plovers made use of the area, which is managed today as part of the San Pablo Bay National Wildlife Refuge, the marsh wasn’t exactly a haven. The unnatural mud buildup was too rapid, preventing the formation of the channel systems that typically run through wetlands like arteries and allow a healthy water exchange with adjacent bays and estuaries. “If this was a natural marsh, it would look like a lung—it would breathe,” says Andrea Jones, director of bird conservation at Audubon California.

Instead, the landscape became a mucky swamp of decaying vegetation, where high tides drowned or forced out wildlife residents and created pools of stagnant water that remained for weeks at a time. In them, aggressive mosquitoes bred and thrived, says Erik Hawk, assistant manager of the Marin/Sonoma Mosquito and Vector Control District, an agency that collaborated on the $3.6 million enhancement with the U.S. Fish and Wildlife Service, Audubon California, and others.

With the channels completed this past fall, Hawk expects to significantly reduce the larvicide treatments that were once routinely spread to control West Nile virus and other mosquito-borne diseases. The marsh’s new and improved foraging grounds will benefit birds, including the endangered Ridgway’s Rail, as well as fish like steelhead trout and small mammals. “We probably got a 50 percent increase in the amount of habitat out there,” says Stuart Siegel, a San Francisco State University professor and a coastal resilience expert who has helped manage the project. 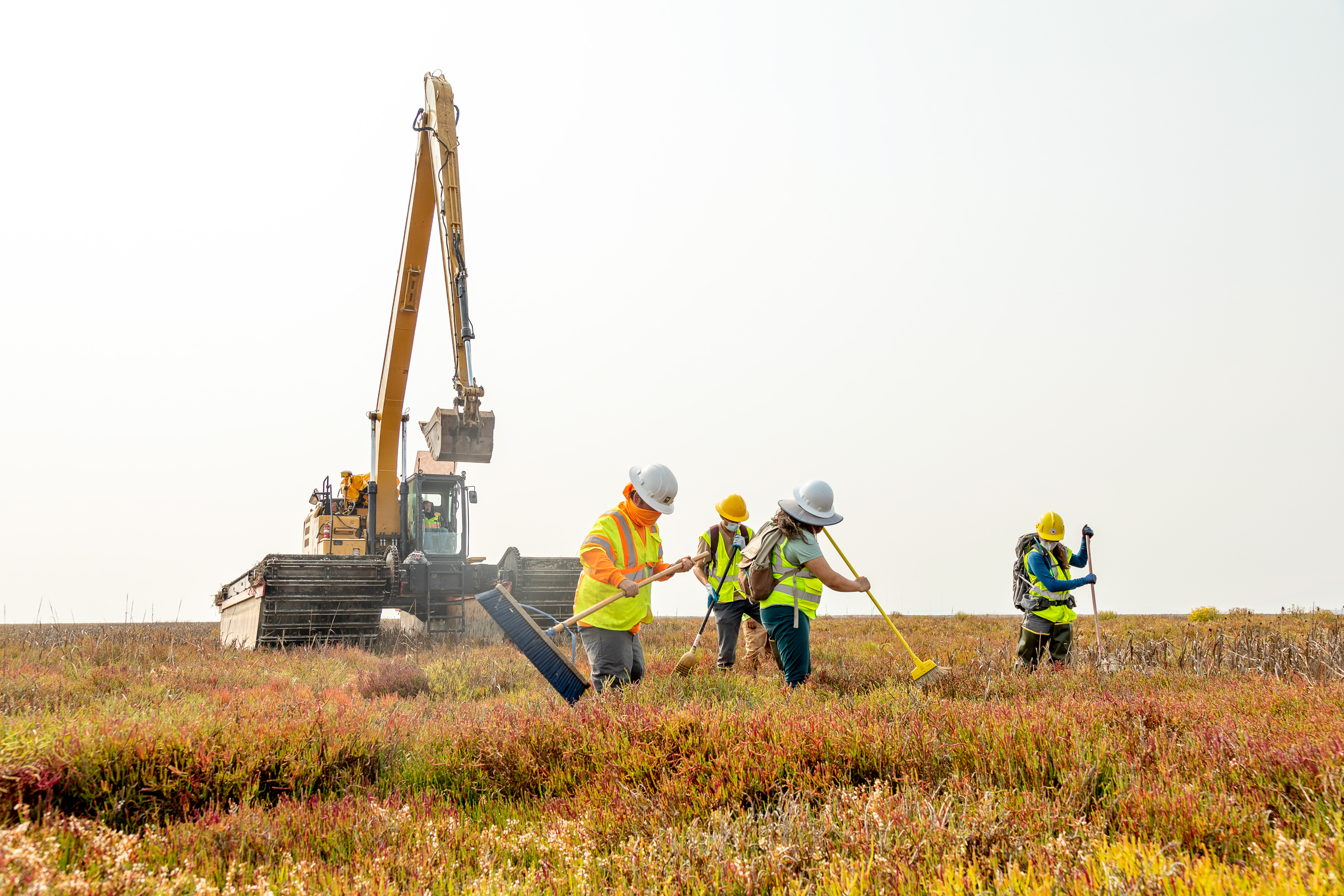 Workers sweep for wildlife while the machinery is moved through the marsh. Photo: Luciane Coletti

Work to reverse-engineer a healthy ecosystem began in 2015, when crews bulldozed a drainage channel about a mile long. But the project’s full ambition was constrained by a regional policy that prohibited most use of dredged material in and around the bay. Filling or otherwise disturbing wetlands is strictly regulated in many coastal zones around the country, says Audubon coastal resilience director Jessica Grannis. Such policies are in place to protect shoreline ecosystems from development but can also limit habitat restoration and climate adaptation. The clear virtues of the Sonoma Creek plan motivated Bay Area officials to modify their restrictions three years ago, making way for its completion. “This was a big, big deal, because they allowed us to put fill on a wetland,” says San Pablo Bay National Wildlife Refuge biologist Meg Marriott.

The benefits include not only correcting problems of the past but also mitigating those yet to come. “This project will help the marsh survive,” says Jones. Mud excavated from the new channels has been packed into a vegetated ramp sloping nearly three feet upward from the water’s edge, offering room to gradually accommodate what could be several feet of sea-level rise this century alone. And new mounds heaped alongside the main channel will grow over with pickleweed and create higher ground for wildlife during extreme high tides and storm surges.

Clockwise from top left: The central and secondary tidal channels during the first phase of the project; Pickleweed plants flowering; The contrast between the dead pickleweed, due to the area’s consistently high waters, and a healthy plant; Cordgrass growing in a secondary channel. Meg Marriott measures the mud height. Photos: Luciane Coletti

The Sonoma Creek enhancement mirrors efforts emerging elsewhere to strategically protect coastal wetlands from erosion and inundation. Land managers are seeking to preserve high-elevation acreage so habitat can move inland in step with an advancing ocean. These “marsh migration corridors” could be especially important in places like the Chesapeake Bay, where slow sedimentation rates, rising waters, and subsiding land mean large swaths of wetlands will be submerged by the end of the century. Around the mouth of Sonoma Creek, undeveloped properties in its floodplain could become salt marsh in the next few decades, but it isn’t clear to scientists whether vertical marsh growth will keep pace with rising waters. Marriott expects the ocean to eventually claim much of the larger San Pablo Bay National Wildlife Refuge. “We’re probably going to lose a lot of land,” she says.

For now, the new habitat is a victory in a year dominated by dual climate and health crises in the state. After the area is cleared, a group assembles to watch the excavator dig a final 30 feet of tidal channel—it will connect a section created in 2015 with one made days before. One sloppy scoop of Gold Country sludge at a time, the channel grows wider until it ruptures, and bay water gushes in.

This story originally ran in the Winter 2020 issue as “Digging In.”​ To receive our print magazine, become a member by making a donation today.