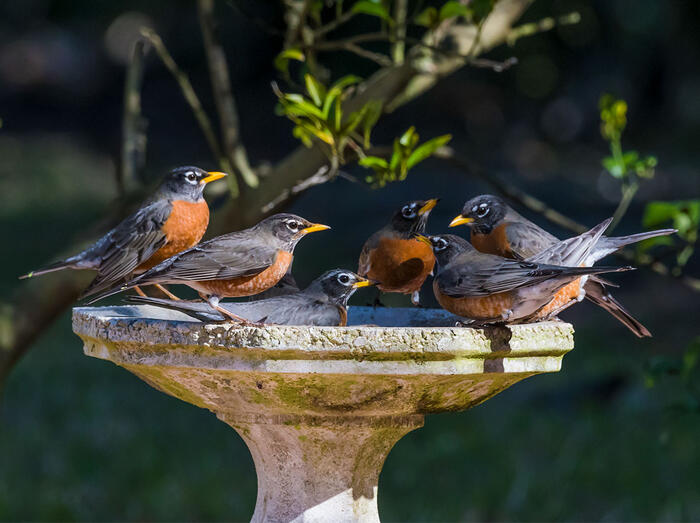 The American Robin is one of North America’s most familiar and widespread songbirds. Found in forests, fields, parks, and backyards across North America—including Mexico, Canada, and Alaska—the robin is also the official bird of three states: Connecticut, Michigan, and Wisconsin. While many people are familiar with their cheer up, cheer up, cheerily caroling, here are some facts you might not know about this iconic American songbird.

1) There are dozens of different bird species across the globe—chats, flycatchers, thrushes—that include the word “robin” in their common name. The American Robin belongs to the thrush family, which also includes bluebirds and solitaires.

2) Early colonial settlers named the American Robin for its resemblance to the familiar but unrelated European Robin, which is smaller but also sports an orange breast and upright posture. Today, the American Robin exists in the form of seven subspecies, subtly differentiated by their body size and plumage, with the exception of one subspecies in southern Baja California, which sports pale gray-brown underparts in lieu of rusty tones.

3)  Though known for being worm eaters, robins have varied diets. Research shows that American Robins mostly eat fruits in the fall and winter, and include more insects and worms in their spring and summer diets. Birders can occasionally spot tipsy robins in the late winter and early spring, thanks to fermented berries they have devoured.

4) Often considered harbingers of spring, not all American Robins are migratory. While many northern robin populations migrate south during the winter in search of food, others remain somewhat local, forming groups that roam the countryside in search of the berries they prefer during the cold winter months. At night, these large and noisy flocks will roost in trees together. 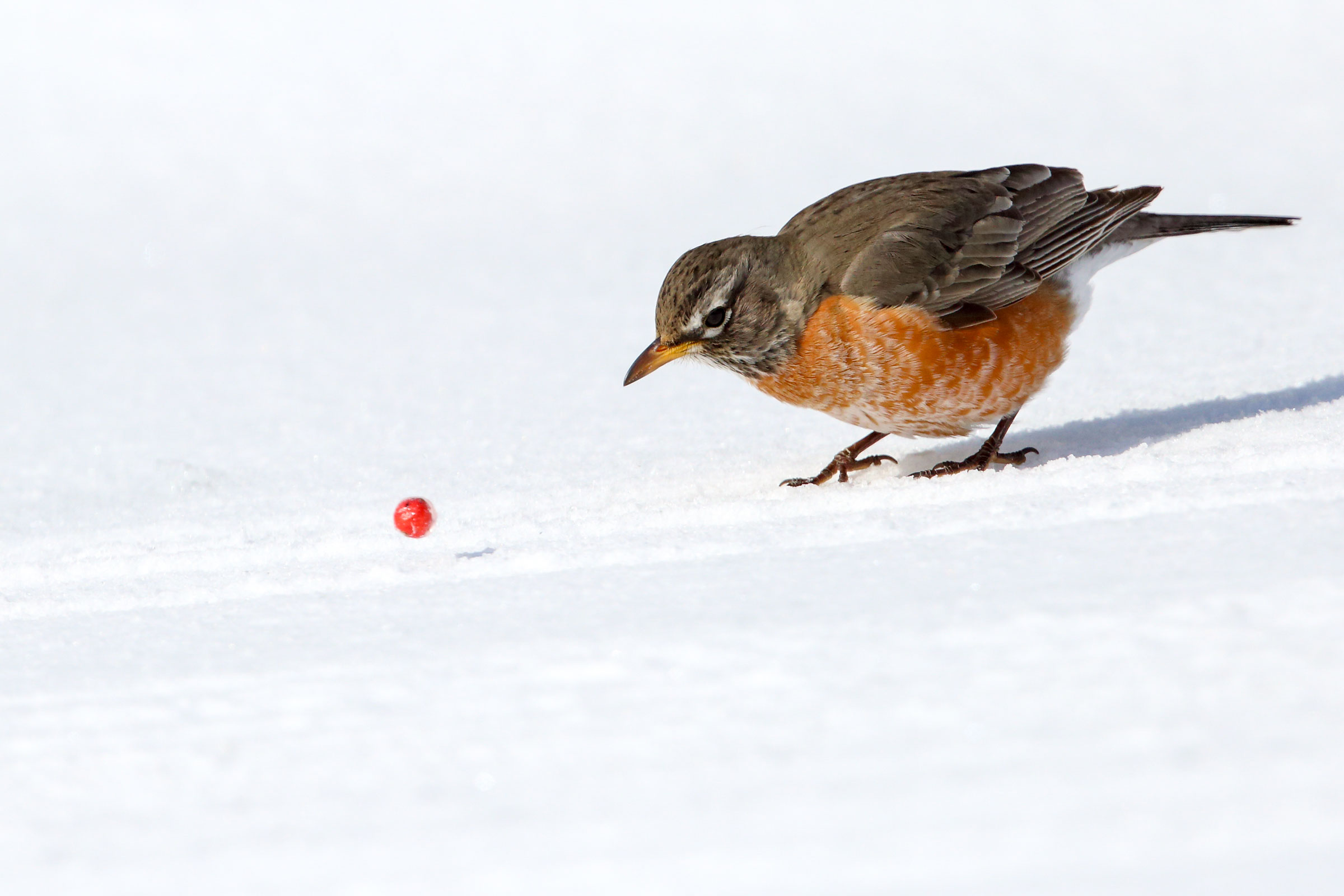 5.) Robins that do migrate can cover a lot of ground: Records show that some birds have traveled up to 3,000 miles, from Iowa to Alaska, during their spring migration.

6.) Like most other migratory birds, robins don’t maintain pair bonds and often take on new mates each spring. At the breeding grounds, male robins put on strutting courtship displays for females. At dawn, they belt their melodious tunes, shake their wings, fluff their tail feathers, and puff their white-striped throats to entice lady robins.

7.) Robins can raise up to three broods in one breeding season, each time laying 3-5 sky-blue eggs that take roughly 14 days to hatch. Female robins pick nesting sites tucked away in thickets or unexposed tree branches, but sometimes they nest on the ground or atop outdoor light fixtures, too. The birds use pieces of straw, twigs, and dry leaves to build cup-shaped nests, and add moss, mud, and sometimes feathers to mend and line the interiors.

8.) Robin nests are often a target of parasitic Brown-headed Cowbirds, who lay their speckled eggs among the robin's eggs. But a study found that robins are extremely efficient at recognizing and removing these unwanted eggs from their nests before they hatch and become competition for robin chicks. 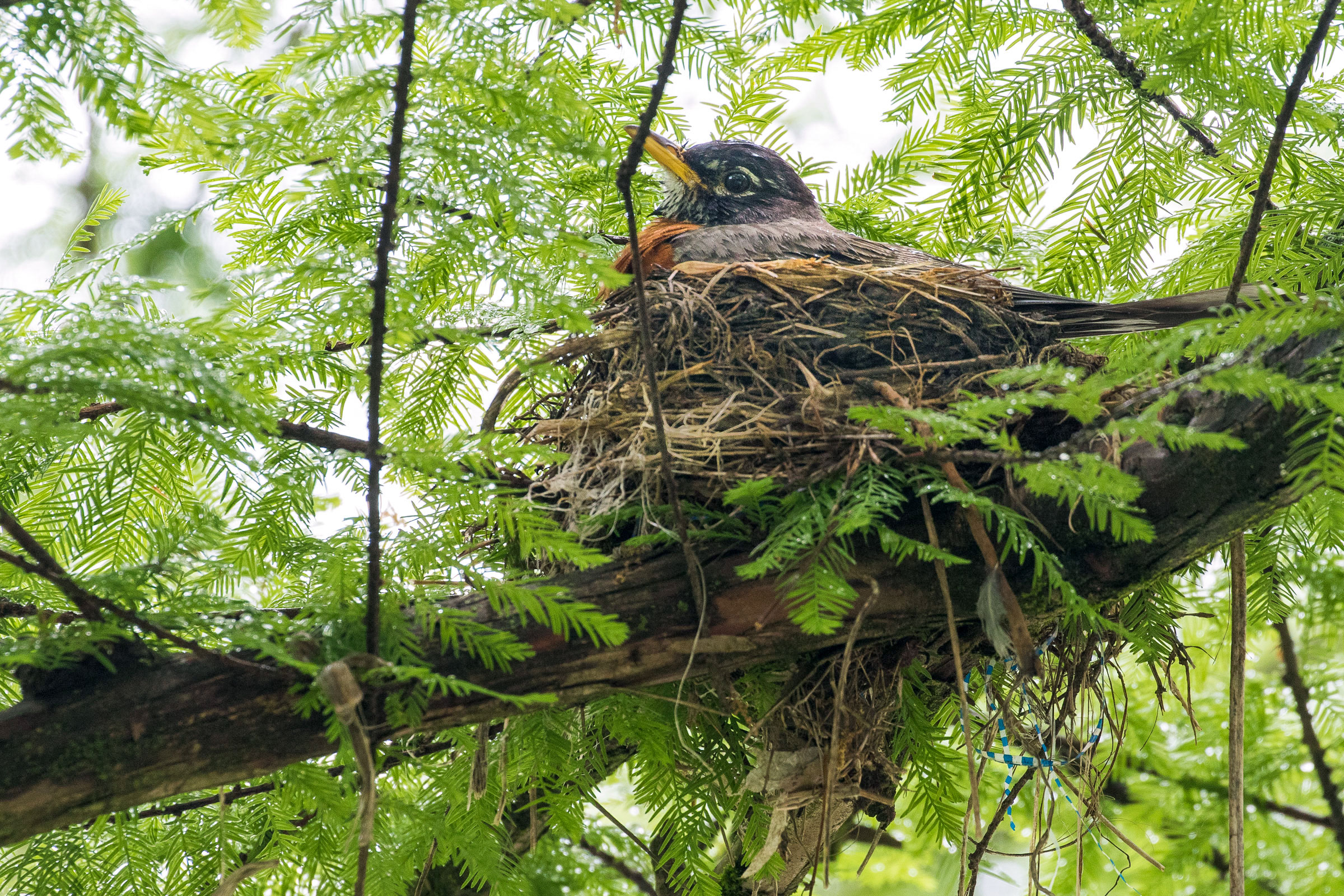 9.) On average, American Robins live for two years in the wild. Ornithologist May Thatcher Cooke maintained detailed records of banded robins in the early 1900s and noted that some individuals live as long as 6-9 years, with one wild robin living almost 14 years.

10.) According to some recent estimates, the American Robin population stands at 310 million. But these ubiquitous songbirds went through a rough patch when DDT use was rampant in the mid-1900s. Robins were among the first avian species found to be affected by the use of this pesticide, and scientists recorded mass mortality events as a result. After the 1972 ban on DDT, their populations quickly recovered.

Now, urbanization, and its associated light and noise pollution are affecting these birds. Bright lights are making city robins sing their morning songs much before the crack of dawn, and their songs are becoming more high-pitched to overcome the din of traffic.